There was an ominous sign for the home-trained team ahead of next week’s Cheltenham Festival when Ireland’s Suprise Package turned Sandown’s Imperial Cup, traditionally one of the most competitive handicap hurdles of the season, into a one-horse show.

The 20-1 shot trained in County Kildare by Peter Fahey and ridden by James Bowen on his 21st birthday crossed an ever-increasing nine lengths clear of Lively Citizen.

Fahey could run Suprise Package in the McCoy Construction County Hurdle at Cheltenham on Friday with the trainer saying: ‘It was a huge performance. He has run in a couple of big field handicaps in Ireland so he’s used to the hustle and bustle. He will go down to Cheltenham tomorrow morning. We will freshen him up and see how things are.’ 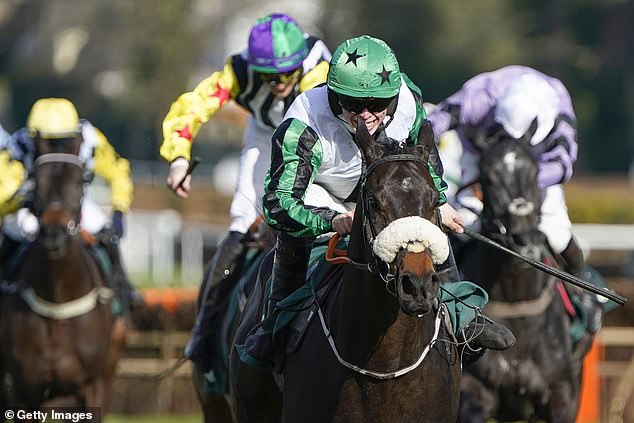 Ireland outscored Britain by 23 wins to five at last year’s Festival, which included winning seven of the nine handicaps.

Since then there have been some changes in the way the British horses are handicapped but yesterday’s result did little to rise British cheer. Irish entries numerically dominate some of next week’s races. That includes having 15 of the 18 entries for Wednesday’s Ballymore Novices’ Hurdle and the chance that Thursday’s Turners Novices’ Chase will be an all-Irish affair.

Ireland has eight of the 13 possible runners in Friday’s Boodles Gold Cup, including the first three home last year.

A Plus Tard is the 3-1 favourite to give Rachael Blackmore a first win for a female jockey in the race.