It is the David-versus-Goliath- challenge that seems a throwback to past Cheltenham Festivals but if Tommy’s Oscar can win Tuesday’s Champion Hurdle for Ann and Ian Hamilton it will be a ready-made script for an award-winning movie.

The gelding, who has won his last four races with ever increasing authority, is one of only four horses being trained by the Hamiltons, who also have 1,000 sheep and 300 cattle on their 500-acre Northumberland farm where Ann was born, 15 miles from Hadrian’s Wall.

On Monday, 74-year-old Ian will drive the horsebox on the 300-mile journey to the Cotswolds so Tommy’s Oscar can line up against unbeaten reigning champion Honeysuckle, owned by Kenny Alexander, who made his millions in the bookmaking business, and 2019 winner Epatante, owned by the even richer JP McManus. 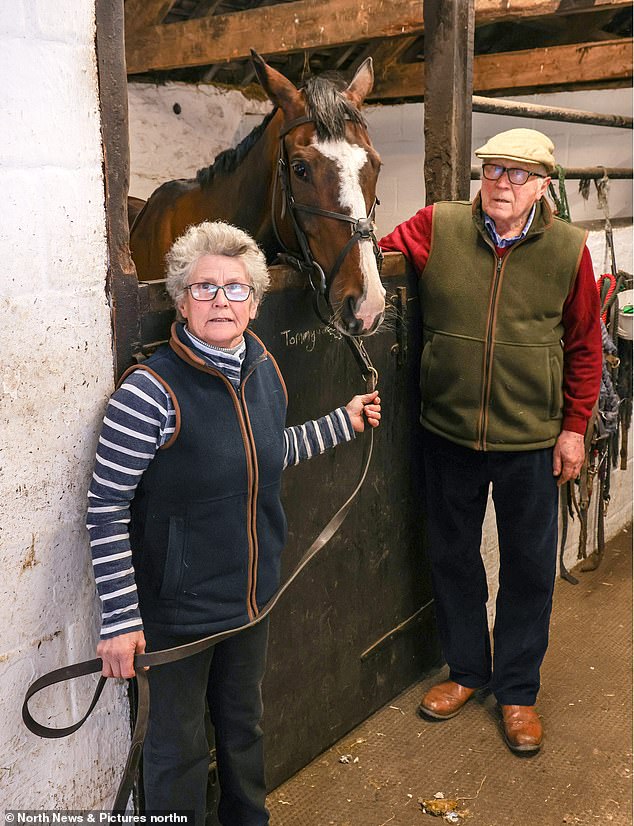 Ann and Ian will be joined by the two stable girls, Laura Fenwick and Steph Bowey, who ride out the quartet of horses each day.

They are doing a good job. The Hamiltons have had 12 winners from only 28 runners — a strike rate of 43 per cent — to follow last season’s 12 wins from 37 runners.

Tommy’s Oscar and three stablemates — Bavington Bob, Pay The Piper and Nuts Well — have all won at least twice this season, with the Nuts Well’s win in the Premier Chase at Kelso last Saturday taking the Hamilton’s prize-money haul to almost £225,000.

Key to their success, Ian believes, is the best feed, water from their own spring and the TLC of the small team. Ian said: ‘It’s sheer dedication and two super girls who help Ann. A happy family looking after them makes happy horses.’

The story has echoes of Nortons Coin, who sprung a 100-1 surprise to win the 1990 Cheltenham Gold Cup for Welsh dairy farmer Sirrell Griffths and occasionally the Hamilton’s horses are used to help round up reluctant cattle. 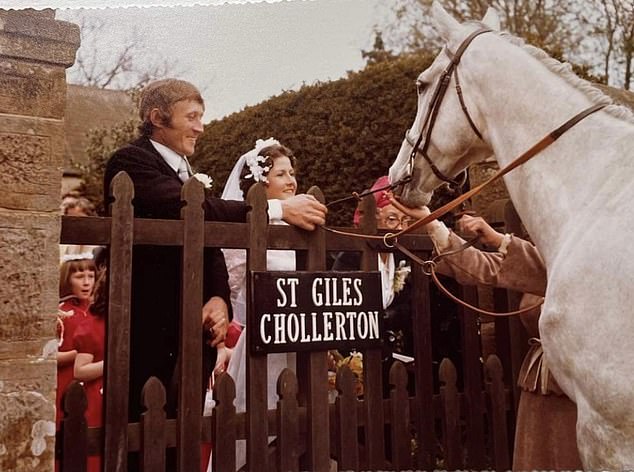 Their involvement with horses dates back almost half a century and 42 years ago Dryburn — a giant of a horse Ann rode in-point-to-points — was a guest at their wedding.

‘Ann had a lot of fun on him, he was as hard as nails,’ said Ian. ‘He ran every week and she won the ladies’ championship in the northern area on him. She is the only one to do that riding just one horse. I think he ran 12 times and won six and was second or third in the others.

‘It was a surprise him turning up at our wedding. It was Ann’s dad’s idea. Dryburn didn’t come to the reception though, he was 16.2 hands — he couldn’t get through the door.’

Ann, 70, who was riding out until last year, was a champion novice point-to-point rider in her youth. She credits the ‘stockman’s eye’ in Ian, who also rode in point-to-points, for picking out Tommy’s Oscar.

Colin Bowe, who runs a renowned nursery for young horses in Ireland, bought Tommy’s Oscar for 70,000 euros but, having taken eight starts in point-to-points, Ian says he cost them ‘about a quarter of that’. The bargain has proved a surprise package. Ian said: ‘We thought he was a potential three-mile chaser but I’m quite pleased that he wasn’t. He has a high cruising speed.’

That has been evident in his recent races. Tommy’s Oscar cruised to a five-length win in the Haydock Champion Hurdle Trial last month. 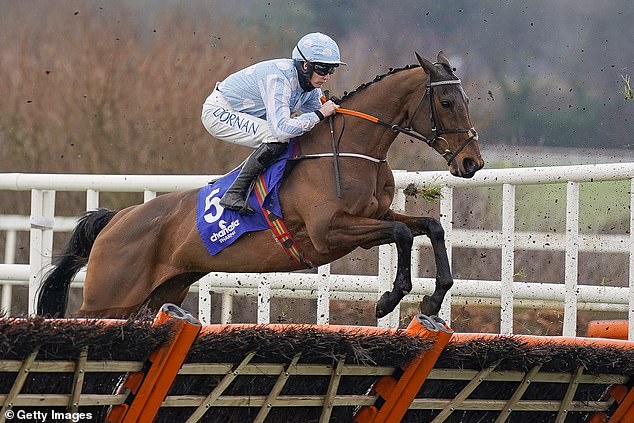 Tommy’s Oscar will line up against unbeaten reigning champion Honeysuckle

Ian believes Tommy’s Oscar is a 33-1 shot for the Champion Hurdle because, despite their record, they are still not taken seriously. They should be. Their wins have included the Fox Hunters’ Chase over the Grand National fences in 2003. But getting there again was not straight forward.

Ian said: ‘We went down in an old cattle box and it was not long after the bomb scare National. The police stopped us and said: ‘Where do you think you’re going with that old wagon?’ We said we’d got a horse for the races but he put a sniffer dog in the back. He couldn’t believe we had a racehorse in there!’

Tommy’s Oscar is not the first runner the Hamiltons have had at the Festival. Runswick Royal ran in the 2014 County Hurdle but it was not a happy experience. A rival jumped into him from behind during the race and he had to be pulled up. Ann vowed never to return but has been persuaded to give it another go.

‘It’s daunting,’ she said. ‘It’s probably out of our league but if we don’t go we’ll never know, will we?’

Ian added: ‘It’s a horse race. The best horse will win whether it is trained by Willie Mullins, Nicky Henderson or Ann Hamilton.’