Corach Rambler came from the rear of the field to score an unlikely victory in the Ultima Handicap Chase at Cheltenham.

Derek Fox produced the Lucinda Russell-trained eight-year-old with a incredible late run to land the spoils in cosy fashion, going away.

Fox was patient on the 10-1 shot after being slowly way due to the standing start. Corach Rambler only had one horse, Belargus, behind him in the early stages of the three-mile-one-furlong stamina test. 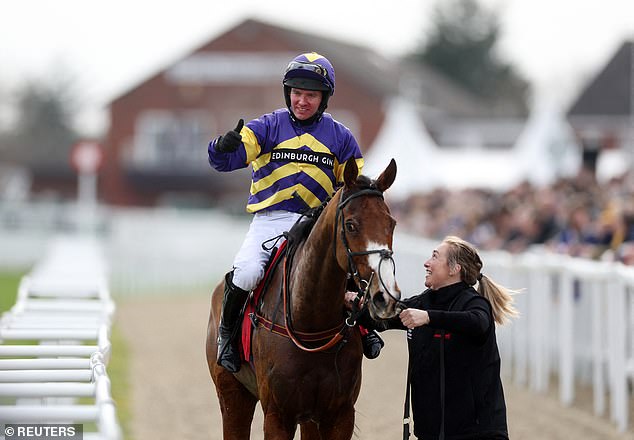 He still had more horses in front than behind him at the top of the hill, but he made relentless progress on the downhill section of the course to challenge the two leaders, Gericault Roque and Oscar Elite, at the final fence.

That pair looked to have the race between them but Fox had other ideas and Corach Rambler came between them in the closing stages to win by two and a quarter lengths from Gericault Roque. Oscar Elite was a head away in third with Tea Clipper eight lengths back in fourth.

Russell said: ‘It means so much. Driving here I said to Scu (partner Peter Scudamore) ‘if we had loads of horses running at the Festival, it wouldn’t matter so much’, but we’re so invested in the two that are here. 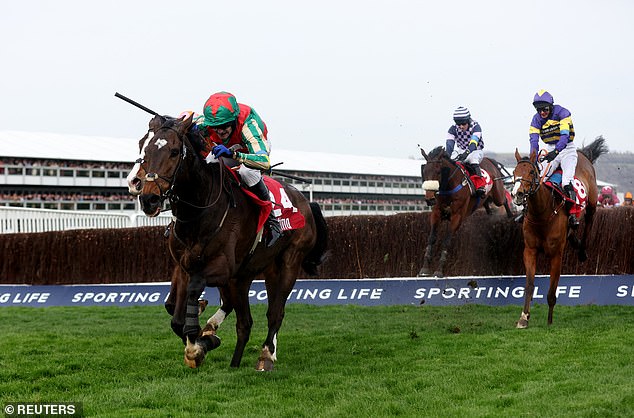 ‘Scu does everything with this horse and it’s not just having a winner at Cheltenham, which means a lot, but it’s about the horse and the owners, a lot of whom haven’t had a horse before. It’s amazing.

‘He worked quite well with Ahoy Senor the other day. Most horses couldn’t lay a finger on him, but this horse got quite close to him.

‘I didn’t want him to go to Ascot last time, Scu did. He said afterwards he would have been first or second and would have gone up 5lb, so maybe it was a good thing that he unseated. 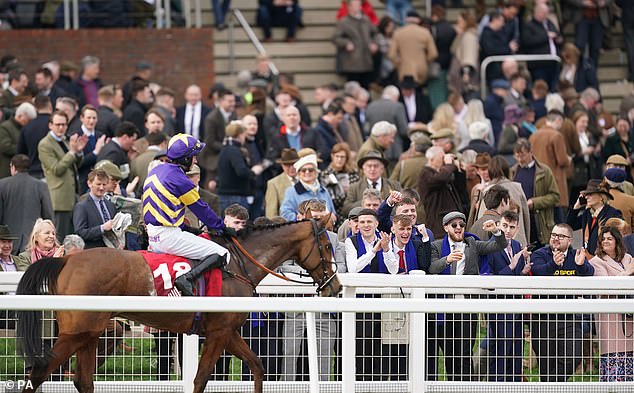 ‘He could be an Aintree horse next year, definitely.

‘Because of the false starts we were at the back and I was stood with the owners and said to one of them ‘we’ll need a vintage Derek Fox ride’ and we got one.

‘It’s funny, it suits the horse as he loves coming through horses. He’s a bit quirky but that was lovely, we knew he’d come up the hill as he’d won here before.

‘I’ve said before, Scu rides him all the time and they suit each other as they are both quirky. I want them to do two canters and he’ll head off and canter on the grass. It’s great, well done Derek.’