From his desk in the racing office, Stuart Slagle views stakes coordination as a vocation that is part sales and part diplomacy, but for him, it is also part science.

As a former academic who received a B.S. in Zoology at the University of Texas in Austin and studied biophysics at the University of Illinois in Champaign-Urbana before working with supercomputers as a system engineer, his approach to filling a stakes race is always interspersed with the scientific method and predictive analytics.

“There is nothing like pursuing the science of a favorable outcome,” he said.

Parlaying those experiences into Thoroughbred racing actually was not a major shift. After all, it is a sport built on figures and a breeding structure handed down across generations.

Originally from Ohio, Slagle grew up among the tumbleweeds in Lubbock, Texas. Loving baseball and football in the Panhandle, he was always fascinated how statistics powered the flow of information. He turned to zoology because it was high time to declare a major during his Longhorn junior year. Classification, behavior and the distribution of animals taught him that observation could be a keen skill to develop.

Computer modeling and predictive analysis melded with handicapping races, which he gave up to seek employment in various racetrack positions over the past 20 years from being a placing judge at Sunland Park in New Mexico to the Racing Secretary at Prairie Meadows in Iowa.

“As an academic at heart, I’m fascinated by a horse’s biomechanics and how aerobic exercise relates to the analysis of speed figures and their standard deviation,” he said.

Though he has studied the science behind how and why certain equine athletes fit into specific races, stakes coordination is a relatively new experience for Slagle, having been hired by Scott Jones to take the helm at the Fair Grounds in New Orleans last fall.

“There are so many experienced coordinators out there that I deeply respect in this business,” he said. “Scott is one of them, and I am just fortunate to follow in his footsteps.”

Moving forward, Slagle’s job is a complicated one when it comes to selection. Before the completion of the meet Mar. 26, he will have to filled 65 starting gates that are worth a combined $8.5 million. Under Jones’s tutelage, his managed lineup includes this weekend’s Silverbulletday S. and the GIII Louisiana S., and of course, GI Kentucky Derby prep races like the GIII Lecomte S., the GII Risen S. and eventually, the GII Louisiana Derby. 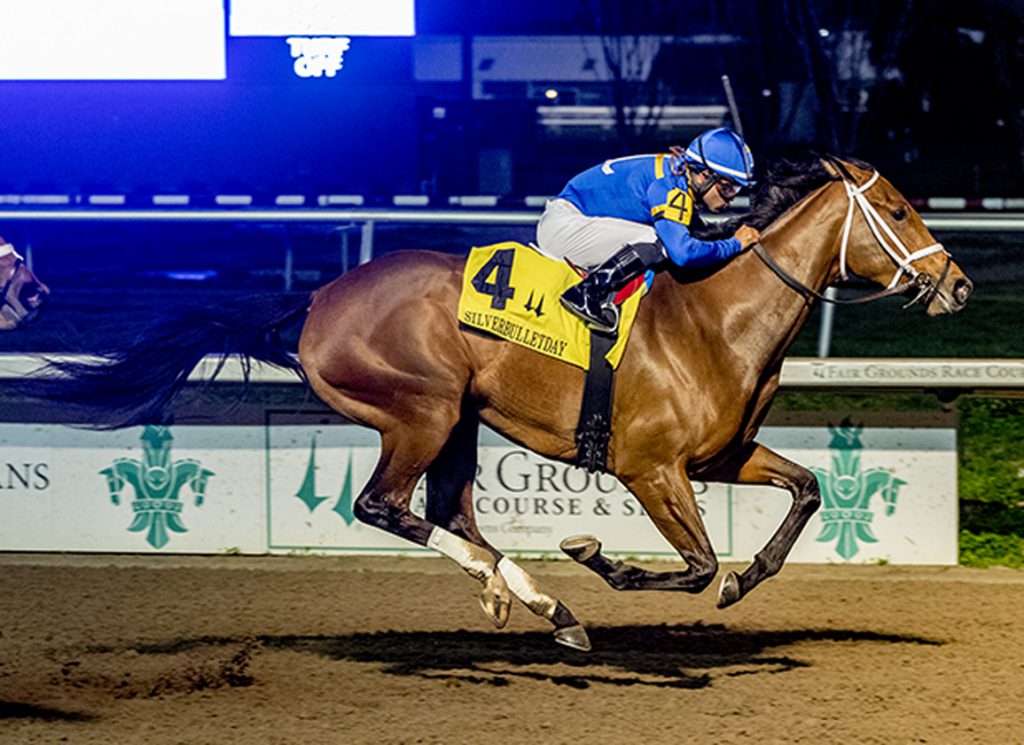 The series for both the Derby and the GI Kentucky Oaks has provided some important stops along those trails, and much continues to be criticized on social media concerning the fact that the Fair Grounds does not have a Grade I race. Slagle explains that needs to be tempered, especially when you consider all of the factors that the Thoroughbred Owners and Breeders Association employs to determine what makes a graded race.

“You have to understand that it is out of your control [grading process] because there are the race quality scores based on speed figures, there’s the workbook, and how the top four finishers perform after the race, just to name a few,” he said.

Within this construct, a stakes coordinator is constantly looking at the many options before them when it comes to filling the entry box. Sure, they are trying to get the best horses possible and the largest fields, but they are also thinking tangentially about a variety of pieces of data.

“We always want horses with stakes experience,” Slagle explained. “But that is not always easy to obtain, so it is important to also think about ones that are class elevating at the right time.”

What a Thoroughbred does with their career after a race at the Fair Grounds could prove just as important to future grading of a race as what it has done before. Running numbers and looking at potential candidates comprises a sea of data. Slagle begins with a control by cold texting and calling some 70-80 trainers that could have prospective runners in their midst. He will get rapid responses, slow ones will trickle in and some will not respond at all.

The science behind the selection process moves quickly to a sales pitch, and then turns into a series of diplomatic talks as barns are cagey about showing where they are going to run next. Most of the time, they will wait till the last possible moment to declare, so Slagle has to be mindful of the options before a race closes. Poker faces are the norm.

Just as with any business, tracks want their stakes competition to have a race worth betting. In other words, a heavy favorite against a group of outclassed runners does not help the handle, and in an age when horses run less, you are asking connections to risk coming to your race, instead of to another track.

“This is a major financial commitment that owners are making by entering a stakes race, and we are asking for them to invest in the product that we are putting out there,” he said. “At the same time, we are also thinking about our patrons, the betting public, and our own bottom line, so there is no recipe for success because each time we do this it is totally different.”

Balancing all of this in his stakes lab, Slagle is seeking equine athletes with potential for success and he determines that by measuring their patterns of behavior. Looking at their early maiden races and the speed figures they posted can be coupled with the distances that they traveled in an effort to help identify potential stars in the making. The results though of these “tests” will not always come quickly, as sometimes a Thoroughbred’s racing maturation develops well after they compete in a Fair Grounds stakes race. That is why decisions that are made now by the stakes coordinator can reverberate into an unknown future.

“When we are putting together a lineup, I still think regularly using the scientific method and hypotheses,” he said. “We know, for instance, which barns run off short rest and all of this data goes into forming a picture of who we should attract.”

With a wealth of experiences, and still much to learn, Slagle is utilizing all of the different disciplines he has encountered over the years at his new job in New Orleans. Like a zoologist in the field, he wants to find the right Thoroughbred that matches his ecosystem. As he builds his hypothesis about each potential entry, the next stakes race slowly, then rapidly takes shape. Then, it is on to the next one.

Returning to Stuart Slagle’s desk at the Fair Grounds, there is a definite science behind his method. A background in zoology can’t hurt when it comes to this type of selection process.