As we approach the opening of the 2023 breeding season, the TDN staff is once again sitting down with leading breeders to find out what stallions they have chosen for their mares, and why. Today we spoke with Conrad Bandoroff at Denali Stud.

We just purchased this mare with some partners in the January Sale and are very excited to have her. She hails from the family of MGISW Cavorting (Bernardini), who has of course produced MGISW Clairiere (Curlin). She is an attractive mare with a lot of quality and will suit Curlin quite well. It has worked in the family before!

A multiple Grade I winner, this is a mare that we have always believed in. Her newly-turned 3-year-old colt Faustin (Curlin) was named a ‘TDN Rising Star’ after winning on debut sprinting. He has a ways to go, but looks like he could be a proper Saturday Afternoon Horse.

I have always wanted to breed her to the Into Mischief line and Life Is Good is a perfect physical match for her. She is a strong, powerful mare and needs a bit of size and scope from the stallion. This is the same cross that produced GSW Gerrymander (Into Mischief).

Last year Lady Apple delivered her first foal, a filly by Quality Road, that we like a lot. She’s everything you look for in a first foal– good leg, and nice strength and substance to her. She is carrying and will soon foal an Into Mischief, so she is getting started with every chance. She is a multiple graded stakes winner who placed in the GI Kentucky Oaks. Her pedigree continues to blossom under Larry Doyle of KatieRich’s management with her newly-turned 3-year-old half-sister American Apple (American Pharoah), a graded stakes winner at two.

Gun Runner needs no introduction and you just have to consider yourself fortunate to have a mare that can warrants a visit to him. This could get you a serious racehorse. 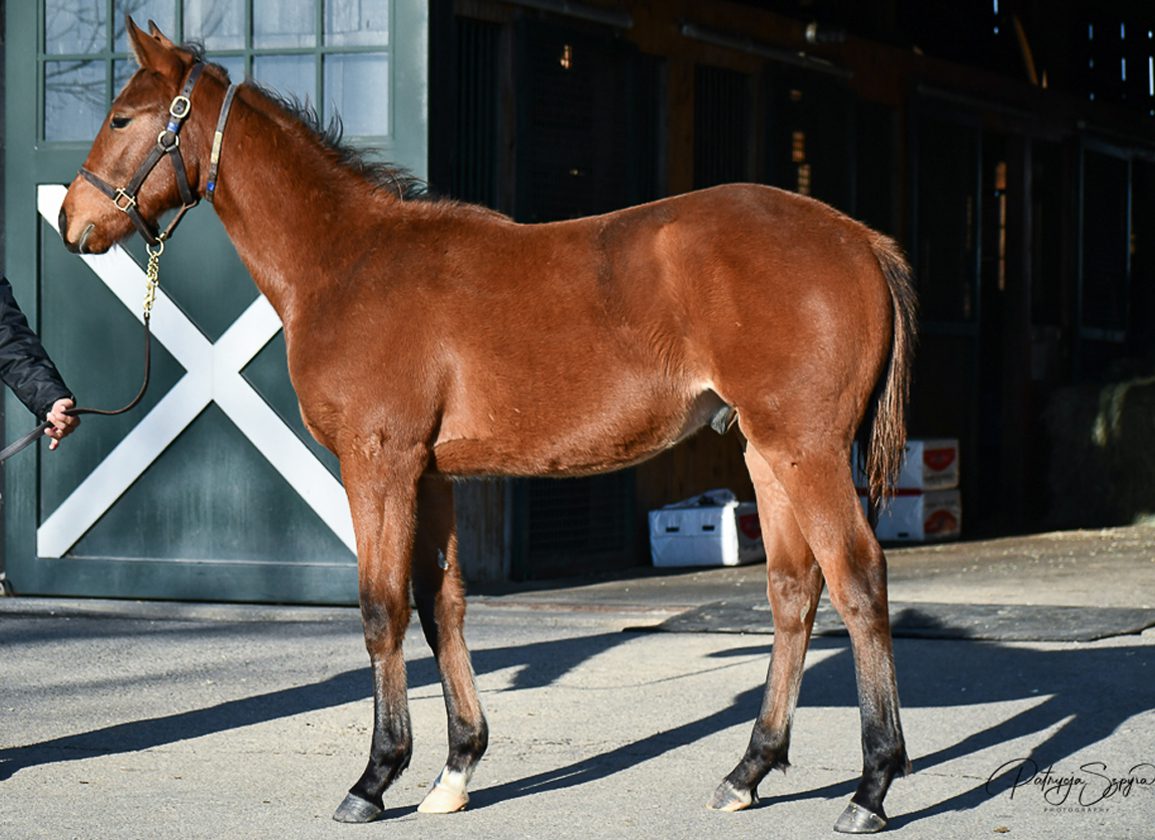 The winner of the GI Starlet S. at two, Dream Tree is off to a good start in her broodmare career. Her first foal, a Curlin filly, sold for $700,000 to David Ingordo at last year’s Keeneland September Sale. She has a highly promising Into Mischief yearling colt and is expecting a Gun Runner for this year. She is a beautiful, powerful mare.

This is a mating we are very excited about. Tapit has done very well over Indian Charlie-line mares. Flightline himself is a prime example. We are intrigued by this 3×3 to Indian Charlie and think it could produce a tremendous amount of speed. A generational talent in Flightline paired with a fast, precocious mare–a promising and potent mix, we hope!

PATHETIQUE (m, 5, Uncle Mo – Dothraki Queen, by Pure Prize) to be bred to Into Mischief

She is an Uncle Mo daughter of GII Pocahontas S. winner and GI Breeders’ Cup Juvenile Fillies-placed Dothraki Queen. Pathetique herself had a ton of ability. She broke her maiden second time out at Saratoga for owner Richard Rigney and trainer Phil Bauer and was a stakes-caliber filly, but unfortunately got hurt. She was fast. Really fast.

We decided to breed her to Into Mischief because we think this could produce a freaky fast horse.

This is a daughter of Tapit that we have high hopes for. She is out of Grade I winner Miss Shop and is a full-sister to the graded stakes-winning Tin Type Gal. She is a gorgeous mare that physically suits Curlin really well. On paper, it is highly productive cross and is responsible for MGISW Cody’s Wish (Curlin), not to mention that it goes back to A.P. Indy, which has been the magic Curlin cross.

WINE PRINCESS (m, 14, Ghostzapper – Azeri, by Jade Hunter) to be bred to Constitution

She is a Grade II and Grade III stakes winner by a Horse of the Year and out of a Horse of the Year. Now 14, what we like about her is that four of her five foals of racing age have made it to the races, won in New York, showed promise, have been sound and have earned over $100,000.

We still feel she can produce a good horse. Her 4-year-old Smokin’ T (War Front) has shown signs of being one and is stakes placed. He’s due to start what we hope will be a good campaign this year.

We rate Constitution as an emerging top stallion. We really like the momentum that he has in some really well-bred crops in the waves. We chose Constitution because Ashiham and Felix the Fox, her two sons by Tapit, had talent and we wanted to send her back to the Tapit line.