Australia’s super sprinter Nature Strip was the toast of Royal Ascot on Wednesday morning, dominating a top field to easily win the King’s Stand in front of 75,000 fans, including the Royal Family.

Trainer Chris Waller was full of emotion after the race, said it was ‘special’ to come all the way from Australia and prepare the horse for a ‘breathtaking’ victory which he counted in the ‘top five’ of his illustrious career.

The five-day Royal Ascot meeting is arguably the world’s most prestigious racing carnival on and off the track, though unfortunately the Queen was forced to miss her favourite event

Nature Strip was the first Aussie horse to win at the carnival since the great Black Caviar saluted in front of Her Majesty in 2012. 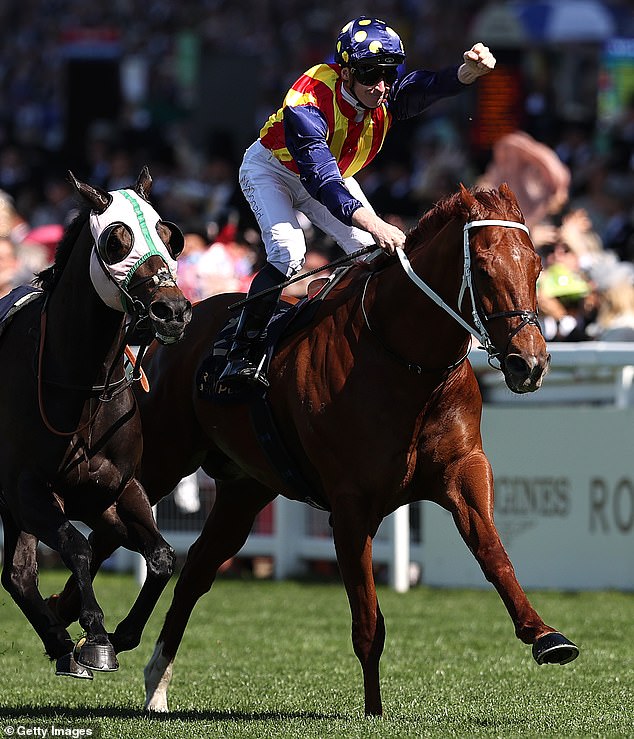 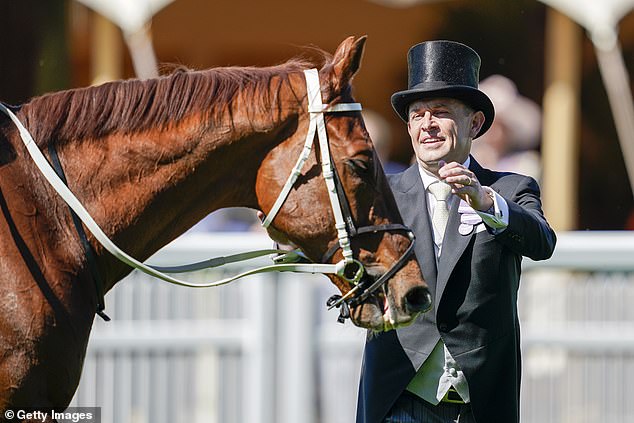 An honorary Aussie after moving across the ditch from New Zealand, jockey James McDonald and Waller accepted the award from Prince Edward in the Queen’s absence.

The seven-year-old gelding is the top-rated sprinter in the world but he wasn’t the favourite for the race – that honour belonged to star American horse Golden Pal.

Fortunately for the Aussie superstar Golden Pal dawdled out of the gates and Nature Strip, who jumped at $3.30, was able to find the front easily and controlled the race to perfection. 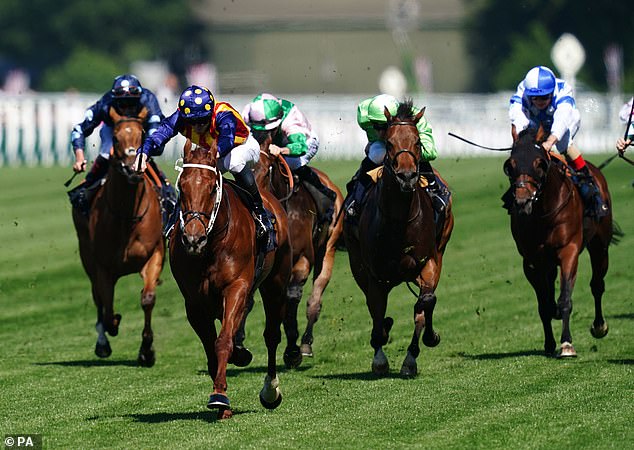 McDonald then got to work and the gelding showed a stunning turn of foot in the straight to blitz the field by an astonishing five lengths over Twilight Calls, with Acklam Express another neck back in third.

The only runner that was able to get close to McDonald was riderless horse Khaadem, who had left jockey Jamie Spencer back in the gates, fortunately unhurt.

Still, even with no weight on his back, he couldn’t match up to the speedy Aussie. 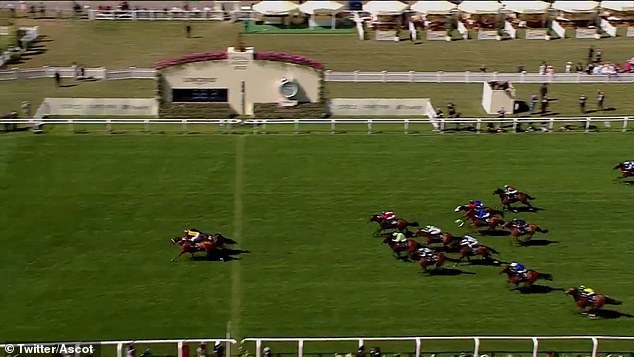 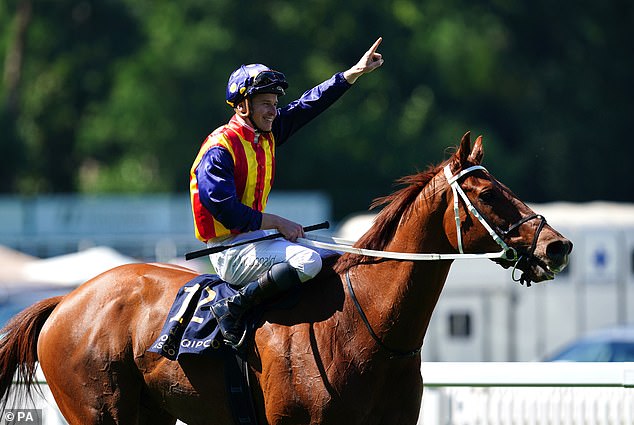 Unfortunately for the Aussie fans tuning in during the early hours of the morning, caller Ian Bartlett completely butchered the moment, referring to the gelding as ‘Nature Stripe’, which left the racing Twitter community thoroughly unimpressed.

Interviewers after the race quipped McDonald ‘would have to do more work in the interview than he did in the race’, such was the ease of the gelding’s victory. 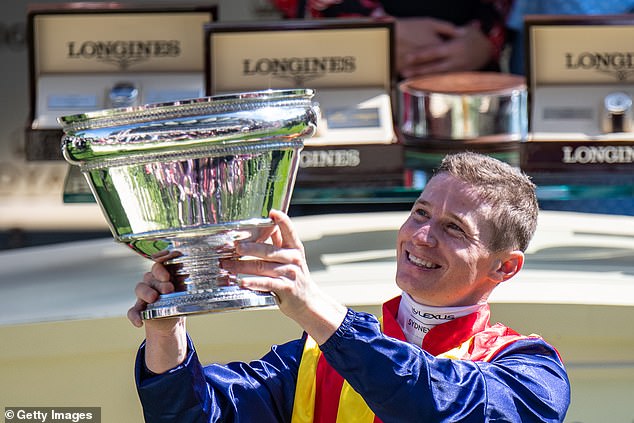 McDonald agreed, and said his mount’s victory was a phenomenal achievement.

‘That riderless horse gave me a fright. I thought, ‘how has one gone with him?’

‘I saw the American horse charge through too at the two (furlong) pole, and I thought, ‘are you going to come?’, and he had no response, and away went Nature Strip,’ said McDonald. 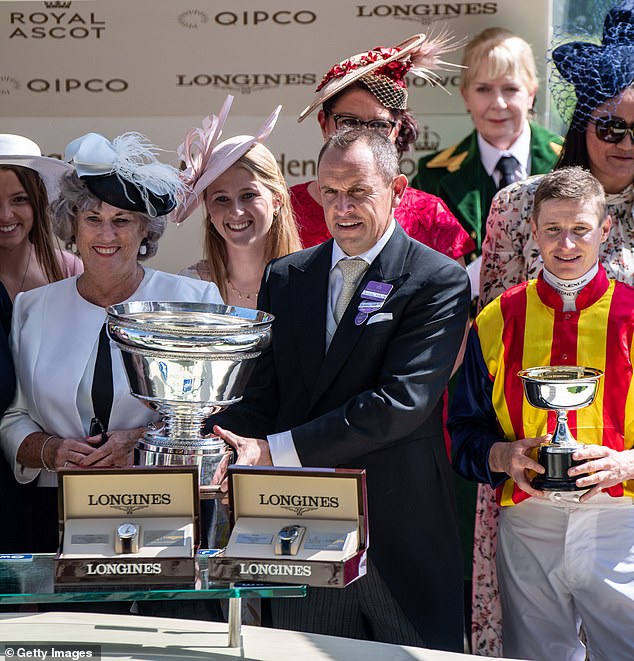 Waller, McDonald and connections of Nature Strip receiving trophies after the race

The Kiwi native, who is currently sitting second in the NSW Jockey Premiership, was full of praise for Waller and the stable, who primed the beast perfectly for the event.

‘The team have done a marvellous job … I think he would have silenced a few critics with that performance, because it was scintillating,’ he said. 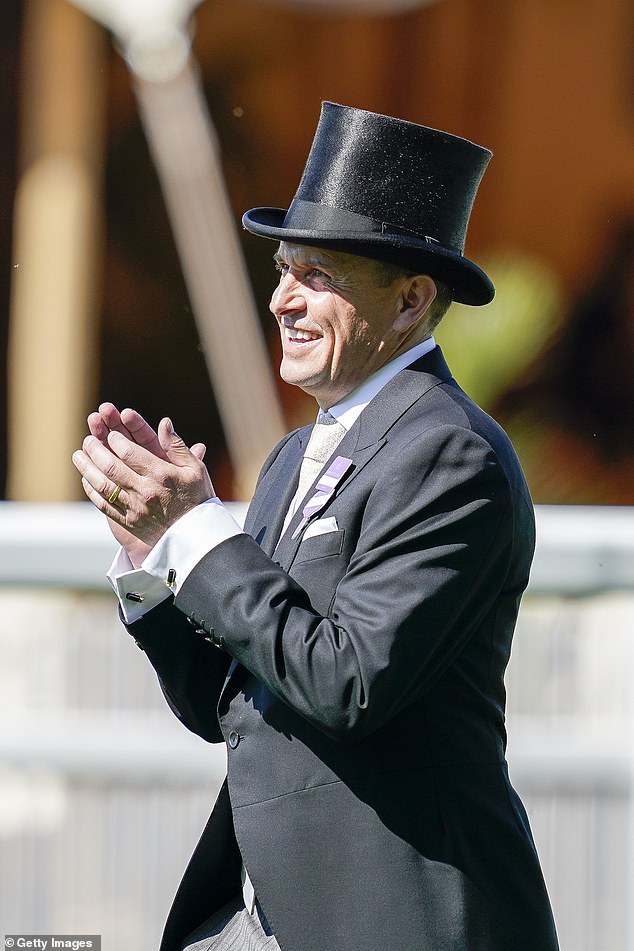 Waller, who always wears his heart on his sleeve at big race meetings, was in awe of how good the win was; and you could tell there was a bit of ‘we’ll show you!’ about this win for the Commonwealth nation.

‘It was breathtaking,’ he smiled on the broadcast after the race.

‘It means a lot. We don’t get a chance to come up and race against English, Irish, French and American horses, so to be able to bring a horse all this way and to win the way he did, it was pretty special.

‘Ratings stack up – Nature Strip’s one of the highest-rated horses in the world but until you do it on the main stage, it’s another story. It’ll just remind everyone how strong we are in Australia,’ said Waller. 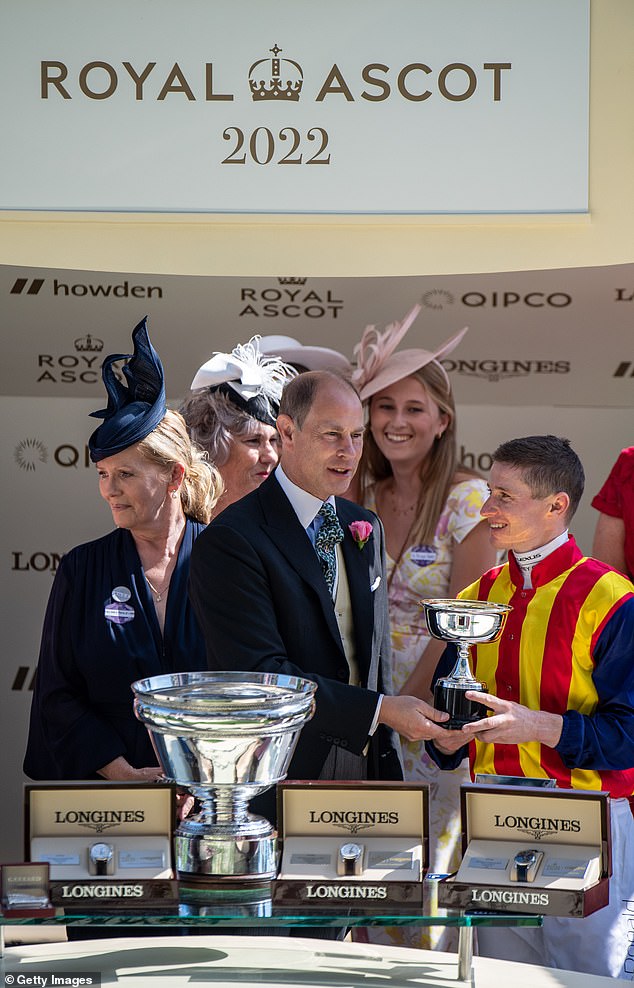 The win had racing fans wonder whether Nature Strip would back up for the Platinum Jubilee Stakes on Saturday, but Waller refused to commit either way; instead reserving his praise for his remarkable runner.

‘We work for a very amazing animal and they are very good to us,’ he said, before choking up.

Australia just continues to show it’s might on the world sporting stage. 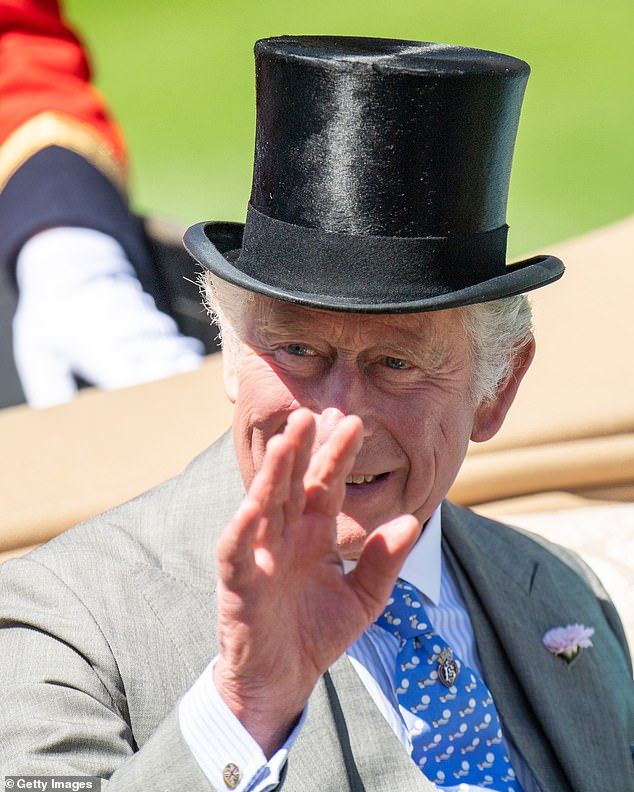 It was a who’s who of royalty and celebrities off the track, though sadly Her Majesty could not attend due to mobility issues.

Instead, the Prince of Wales and Duchess of Cornwall were in attendance alongside a host of other royals – including Princess Anne and her two children Peter Philips and Zara Tindall, Countess Sophie Wessex and Princess Beatrice, who was joined by her husband Edoardo Mapelli-Mozzi.

Just over a week after the Platinum Jubilee celebrations ended, members of the Royal family appeared in high spirits, with many taking part in the carriage procession, before greeting one-another in the warm summer sunshine at the racecourse.

More than 75,000 fans were in attendance for the meeting in glorious weather, and no doubt many of them will be returning to the track over the next four days.

Meanwhile the Duchess of Cambridge’s parents Carole and Michael Middleton also made a surprise appearance at the event. 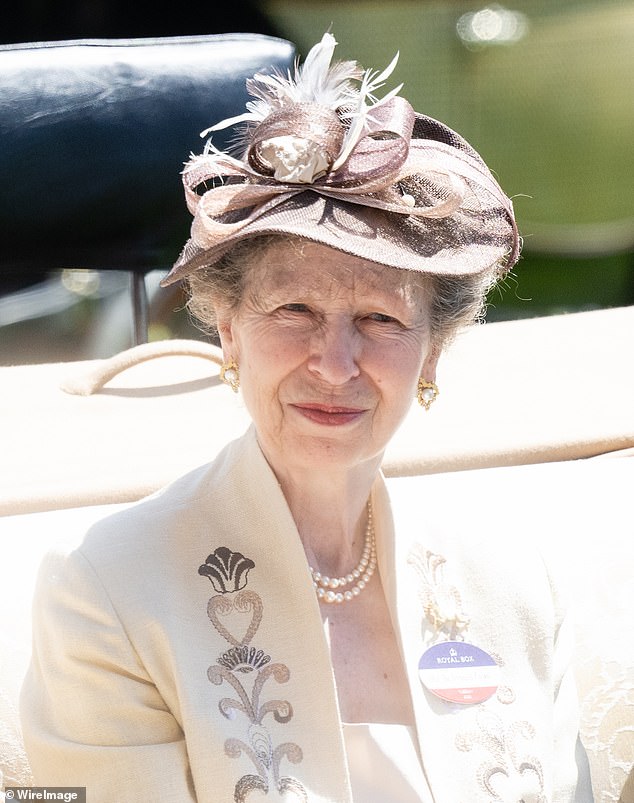 Princess Anne is seen during the Royal procession 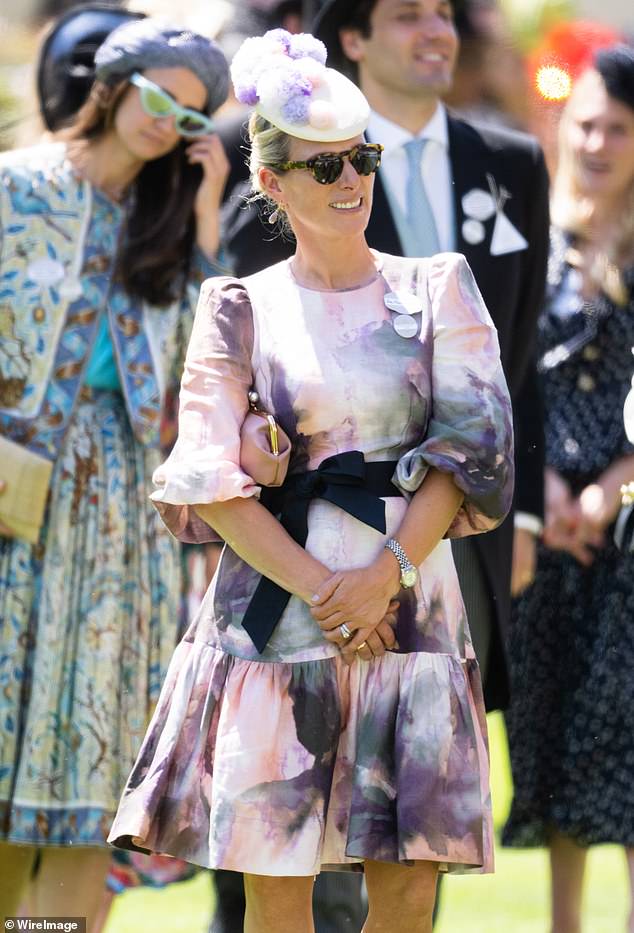 Zara Tindall, an Olympic equestrian, donned a purple and blue gown for the occasion

Sophie, the Countess of Wessex, opted for an eye-catching Jane Taylor 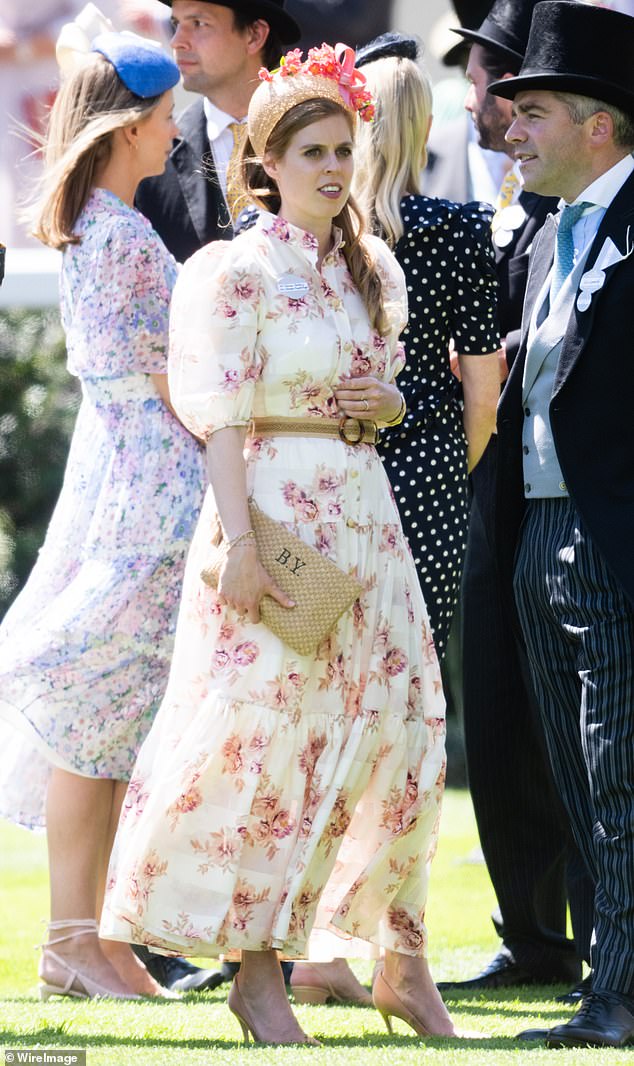 Princess Beatrice of York had a playful, monogrammed clutch to go with her outfit