Belgian jockey Christophe Soumillon accepted he had made a mistake when he was hit with a 12-day ban for careless riding after his euphoric celebration at winning the Coral-Eclipse Stakes at Sandown on Vadeni almost caused fourth-placed Lord North to be brought down a few strides after the line.

Soumillon had been at his best as he harnessed the 11-4 shot’s devastating turn of foot to become the first French-trained Eclipse winner since 1960 with a win by a neck from Mishriff.

But as the 41-year-old fist-pumped with joy leaving only one hand on the reins, he allowed Vadeni to drift into third-placed Native Trail, who in turn bumped into Lord North. 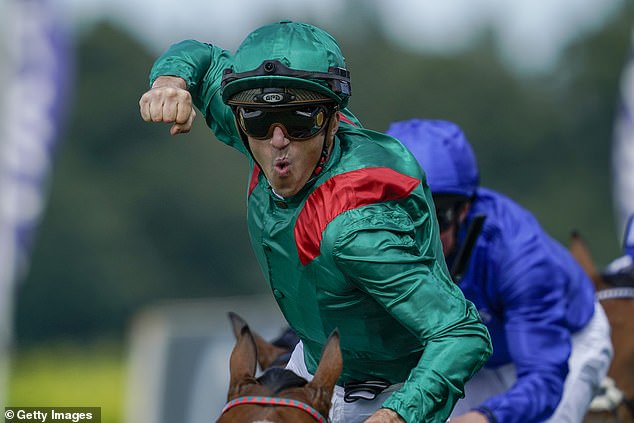 The 10-time French champion jockey said: ‘I made a little mistake, you have to be more careful. My job is to go from point A to point B as fast as possible and unfortunately after point B, I wasn’t good today.

‘I exploded like maybe I have never exploded before after the line. That is one more lesson in my life. Next time I will have to celebrate less.

‘It wasn’t before the line, so hopefully nobody will complain about this. I hope the horses I put in trouble are OK.’

Soumillon’s error did not detract from the performance of Vadeni, owned by the Aga Khan and supplemented to the race by trainer Jean-Claude Rouget on Monday. 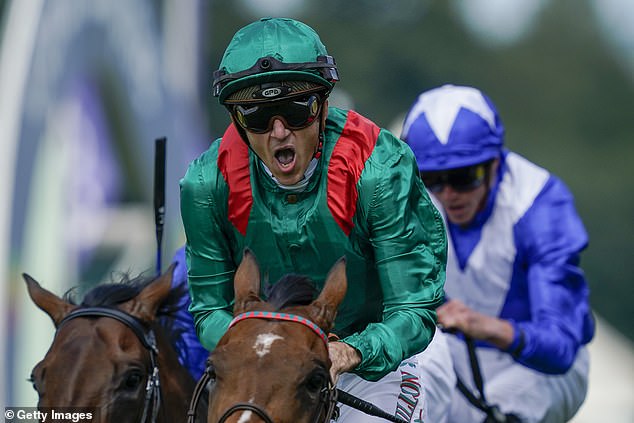 Rouget will now aim Vadeni at the Irish Champion Stakes at Leopardstown in September — a race Rouget won with Almanzor in 2016.

A longer term shot at the Prix de L’Arc de Triomphe looks out, with Rouget adamant Vadeni is a mile and a quarter horse.

The unluckiest runner in the field was Mishriff, who had to wait for a gap to appear to make his run. John Gosden, who trains the five-year-old with son Thady, had earlier hinted at a rapprochement with Frankie Dettori.

The trainer said he was happy with the Italian’s reaction to last week’s split with the stable, which Gosden has called a ‘sabbatical’.

Dettori rides in Sunday’s German Derby and will pick up mounts for Mark and Charlie Johnston at this week’s Newmarket July meeting. 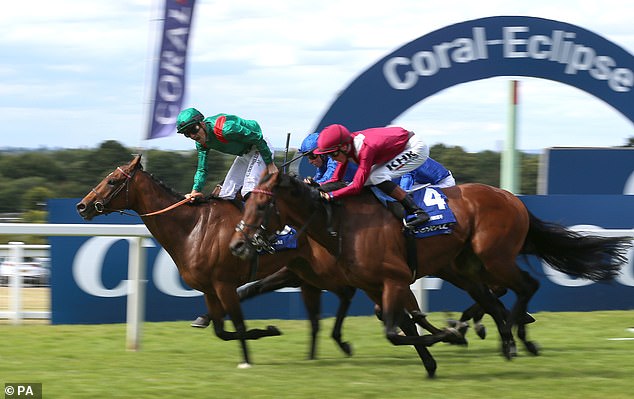 Gosden had said he was not happy with Dettori’s off-track distractions and the amount he was riding.

On Saturday, Gosden trained the winner of the Coral Distaff, Grande Dame, ridden by Ryan Moore.

When asked about his long-time regular jockey Dettori’s response to the split, Gosden said: ‘I’m absolutely over the moon with what he is doing. It is exactly what I wanted to see.

‘He and I will be back together quite sensibly when we pass through this.

‘He knows as well as I do you have got to be riding and not have any distractions. I’m really pleased with the programme he has got.’

Meanwhile,  TORQUATOR TASSO, the winner of last year’s Prix de l’Arc de Triomphe, bounced back from a disappointing defeat on his seasonal comeback in May to impressively win the Grosser Hansa-Preis in Hamburg by three-and-a-half lengths.

The next race for the five-year-old, who is trained by Marcel Weiss in Germany, could by the King George VI & Queen Elizabeth Stakes at Ascot on July 23.