Trainer Charlie Appleby says he is confident he goes into Saturday’s Coral-Eclipse Stakes at Sandown with the best horse but concedes the big question mark hanging over Native Trail is his stamina for the mile-and-a quarter trip.

The Godolphin-owned colt suffered the only defeat of his seven-race career when runner-up to stablemate and subsequent St James’s Palace Stakes winner Coroebus in the 2,000 Guineas at Newmarket.

Native Trail has since won the Irish 2,000 Guineas and his usual running style of hitting a flat spot before galloping on strongly suggests this first run beyond a mile should suit William Buick’s mount. 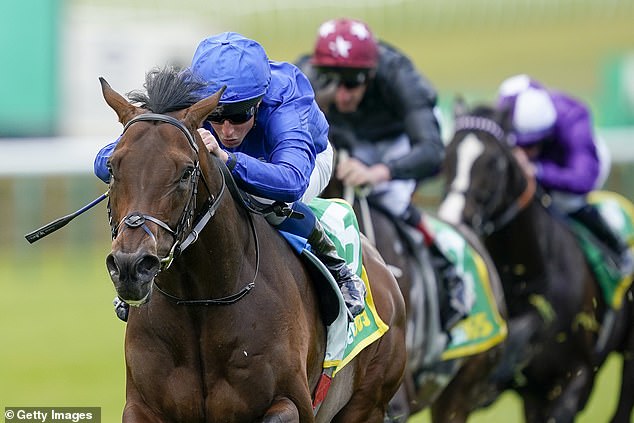 But a stiff examination of his staying power will be laid down by impressive French Derby winner Vadeni and a quartet of talented older opponents, headed by Prince of Wales’s Stakes runner-up Bay Bridge and Mishriff, who was third in last season’s Eclipse before winning the International Stakes at York.

Appleby, who has a line on the French Derby form with his French 2,000 Guineas winner Modern Games finishing third, said: ‘We are taking on elders but he will not look out of place in the paddock and receiving that weight allowance will be a huge advantage.

‘We are not dealing with an unfurnished three-year-old — he is fully developed. His best work in the Irish Guineas was in the last couple of hundred yards. It is time to test him over further.

‘If he’s still in the hunt going into the final furlong we know he has the gear changes.’

The Eclipse offers the opportunity to test the Classic generation against more proven opposition. The signs so far for the class of 2022 have been positive, with Desert Crown and Westover, the English and Irish Derby winners, posting impressive performances and everything we have seen from Native Trail and Vadeni suggests they are well up to standard.

Three-year-olds, who receive 10lb, have won 51 of the 125 runnings of the Eclipse and some really good ones are on the roll of honour — from Mill Reef to Dancing Brave and Sea The Stars, and more recently Golden Horn and Roaring Lion.

It looks likely that the French challenger will give Native Trail most to worry about. Trainer Jean-Claude Rouget has never had a runner at Sandown and the last winner of the Eclipse from across the Channel was Javelot in 1960.

Vadeni’s owner, the Aga Khan, paid £50,000 to supplement him into the race and he is trying to complete the French Derby-Eclipse Stakes double secured by Aidan O’Brien’s St Mark’s Basilica last year.