Harry Redknapp’s undying love for horse racing cannot be called into question. Having retired from football management in 2017, there is nothing the veteran of the national sport loves more than a ‘day at the midweek racing’.

He is purist of the sport, preferring, as he puts it, ‘to go to Fontwell on a Tuesday afternoon, or Wincanton’ rather than your big traditional meets, such as Ascot.

‘Go to Wincanton and [you have] all the old farmers there, it’s a great atmosphere and it’s different and its fun,’ he explained. 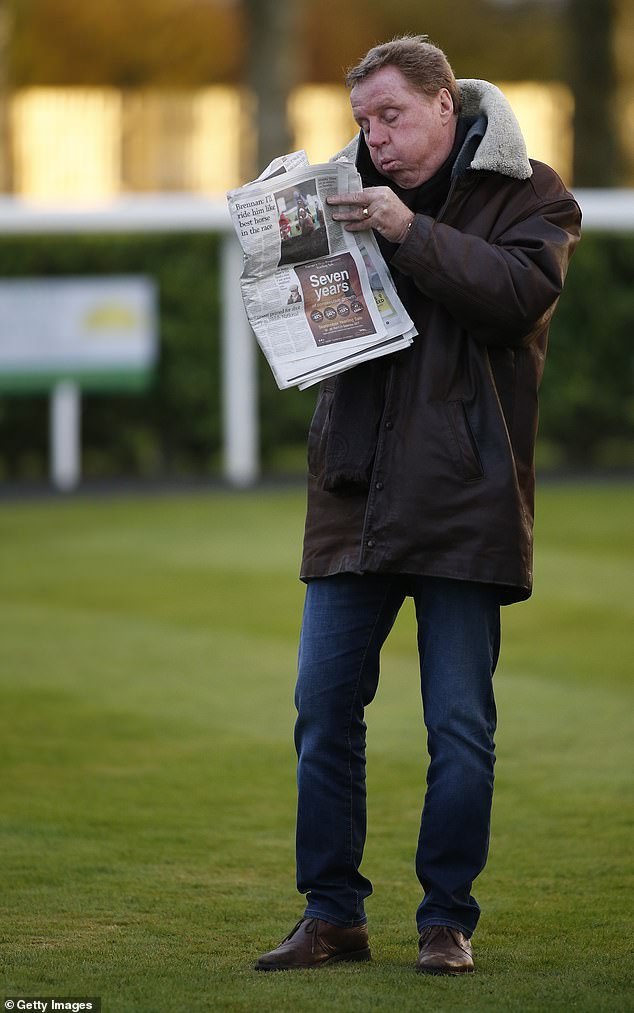 However, on Friday Redknapp will be taken out of his traditional racing comfort zone when he goes to Epsom for his horse Moktasaab in the Epsom Cazoo Handicap on the Oaks and Derby weekend.

Trained by William Knight, the horse will go off favourite for the pre-Oaks class two handicap. It won on its last outing at Goodwood and should enjoy the trip over 1m 2f.

It has been suggested it is Redknapp’s best flat horse since Moviesta, a view that the former West Ham and Tottenham Hotspur boss did not deny.

‘Every chance,’ he told Sportsmail. 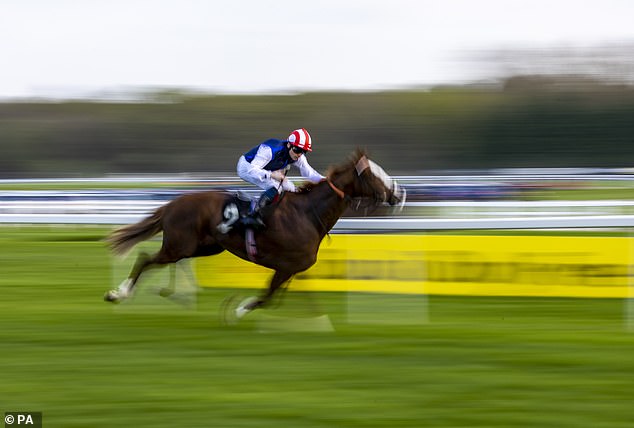 ‘We had Wake Up Harry with Simon Dow and that looked very, very promising but he’s had injuries since then unfortunately and not really been able to [make headway],’ he said.

‘[But] William Knight is really pleased with him (Moktasaab) and he’s working well still, he still thinks he’s got improvement to come. Callum Shepherd [on board], I’m a big fan of Callum Shepherd as a jockey, so we’re really looking forward to Friday to have a nice day out and hopefully the horse runs well.’

‘It’s special to be going there with a horse that’s got a chance in one of the races so we’re really looking forward to it,’ he added.

Speaking to the man who was long touted for the England national team job, it is striking how much more racing peaks his interest rather than the game he was a significant part of from the early 1960s until his last managerial job in 2017. 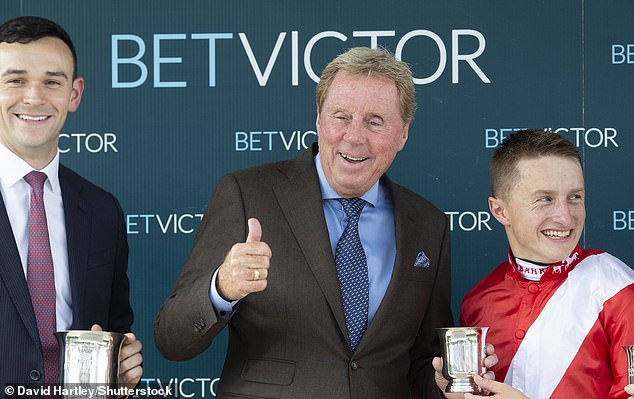 It is the people, Redknapp said, who make the game what it is.

Redknapp’s love of ‘racing people’ is perhaps why, in his own words, his choice of an afternoon at the track would be a Wincanton or Fontwell during the week.

Ascot, for instance, is ‘special’ he says, but it’s ‘changed’ and is no attracts the kind of racing people that he is so fond of.

‘I mean Royal Ascot is not so much racing people now, is it? If we’re honest. It’s a great day out still, it’s a great five days. But I’ll be truthful, I’m a midweek racer. If I’m going racing I’d rather go to Fontwell or Wincanton. [I also] love a day at Newbury,’ he said. 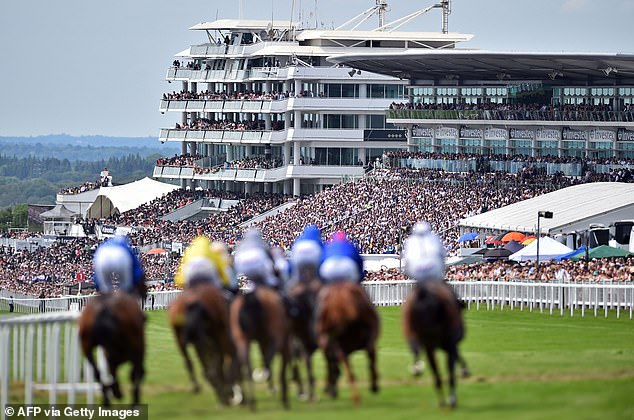 The day out at Epsom is one of the great days in British sport, especially if you have a fancied chance heading to Surrey 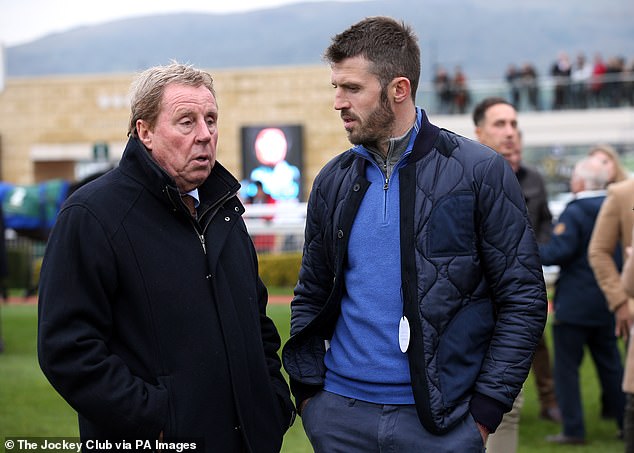 Redknapp’s first introduction to race horse ownership was through David Elsworth, the now-retired trainer who gave the-then Bournemouth manager his first taste of the owners and trainers enclosure.

‘I was at Bournemouth and we had it with David Elsworth, me and three or four [others], including the vice-president. We all put around £1000 in each and bought a horse with Elsworth called Slick Cherry, and we had great fun with him,’ he explained.

‘It ran on the flat for us, he won over the hurdles for us. And just getting down to Elsworth’s yard on a Sunday was such a treat for us. “Elsy” was an amazing man for us, a great character.’ 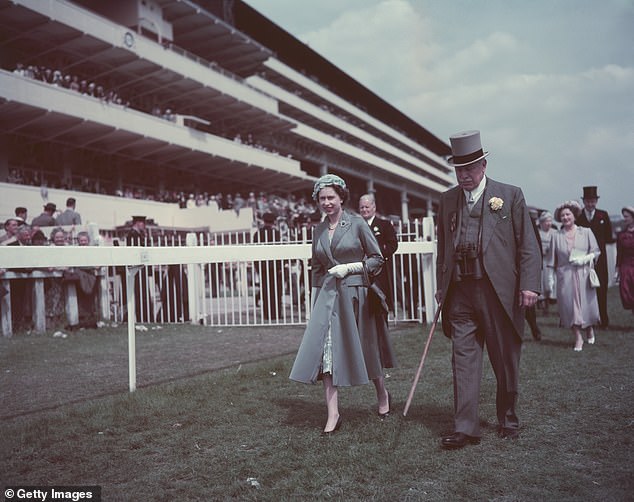 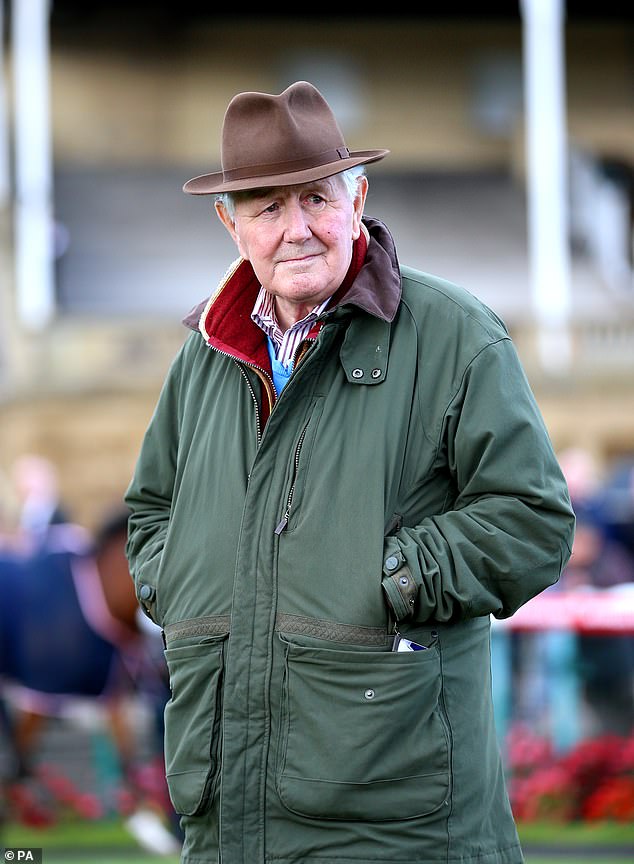 Redknapp’s love of a ‘character’ is well documented. Growing up in the East End, the Poplar-born boy who rose to become one of the English club game’s most respected managers for a period of time, his introduction to horse racing came at a formative age.

‘My nan used to be the bookies runner in the East End of London,’ he said. ‘I’d come home from school and have my dinner and my Nan would be getting put in the back of a black Mariah, when I was about five, six, seven, eight-years-old because betting was illegal!’

‘Back then, our bookie was Cyril the paperboy, who wasn’t young, he was about 60-odd. My nan would come round and collect all the bets off the old girls in our street before putting them in Cyril’s bag and he’d come the next day and pay ‘em,’ he added. 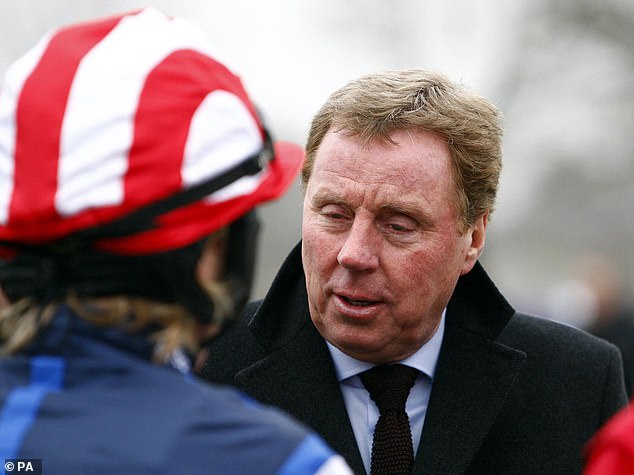 His promise as a footballer led him to the books of Spurs and later West Ham, but his interest in racing never waned.

‘I loved it; I’ve always been interested in it. Listen, you should only bet what you can afford to lose, but I love it, it’s my big passion.’

Redknapp’s baptism of fire into racing sports, horse and greyhounds, did not stop with his grandmother taking peoples’ bets on the street he grew up on.

‘I grew up at West Ham and as a player [you were surrounded] by punters, all the older players loved a bet,’ he explains, revealing where his love for horse racing and gambling first spawned.

‘On a Friday morning you used to come to the ground and do your own thing, you would come in and have a jog around the pitch at Upton Park and Budgie (Johnny Byrne) would sit on the far corner and Paddy O’Leary who used to work on the ground and sleep at the ground, he’d come over with a big mug of tea and Budgie would read Sporting Life. That was his preparation.’ 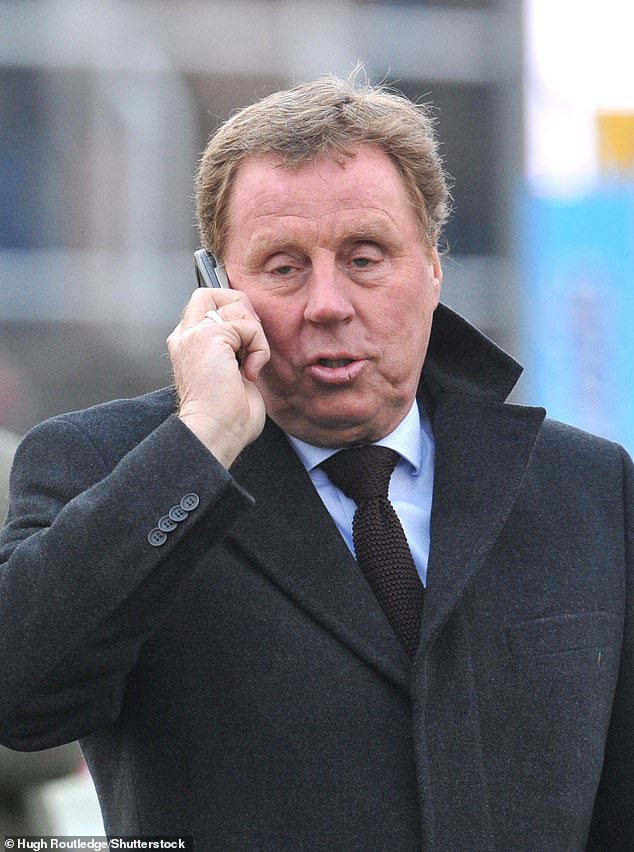 Redknapp’s love of racing is as much about the people within it as the actual sport, and it is curious to know whether he feels football has lost this.

‘The characters? Well, yeah, those characters are not around anymore. In the Premier League there’s very few home-grown players, back in the day we were all boys…from the East End of London, we were all, y’know, having a bet.’

Quite a large part of the interest in racing stems from betting, but it also comes across that what Redknapp genuinely loves in his life is camaraderie, and as he says on various occasions, ‘making friends’.

A career in football spanning the best part of six decades is likely to make a man friendly and welcoming to all, considering the dichotomy of individuals that have been in the game since Redknapp’s first professional involvement in the 1960s.

It is perhaps no surprise, therefore, that he has recently become involved with a new syndicate, the Orbital Racing Group.

‘I think it’s a great way to go racing, with some people, you make new friends, you are already together and you get so much fun out of it. You feel like it’s your horse.’ 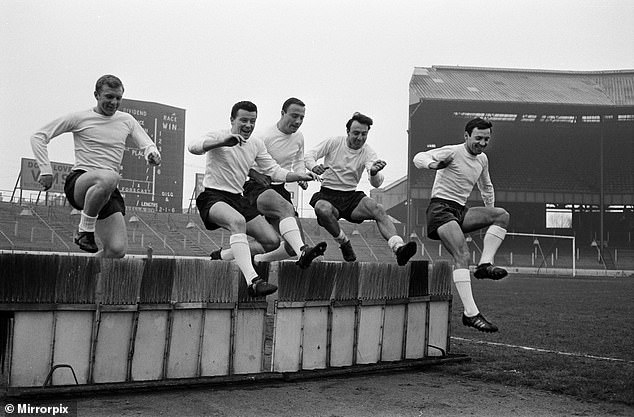 Orbital Racing have Kessaar Power running in the Woodcote Stakes on Friday in the first race of the day at Epsom.

Redknapp has been involved in the game for a long while so offers to join syndicates cannot have been rare, but this one appeals owing to his friendship with John Egan, the veteran jockey who will ride some of the syndicate’s horses.

The plan is for the syndicate to take horses abroad, tapping; in particular it seems, into the lucrative Middle Eastern market.

Redknapp speaks glowingly of his trip to Bahrain with figures from the syndicate last year.

‘We went over to Bahrain, played golf, went racing. The racing was amazing, the way you got treated there, the food kept coming. Nice drinks kept coming. It was a great place to go, it was a really enjoyable trip,’ he said. ‘I think it’s good, making a few friends, so I’m all for that idea.’ 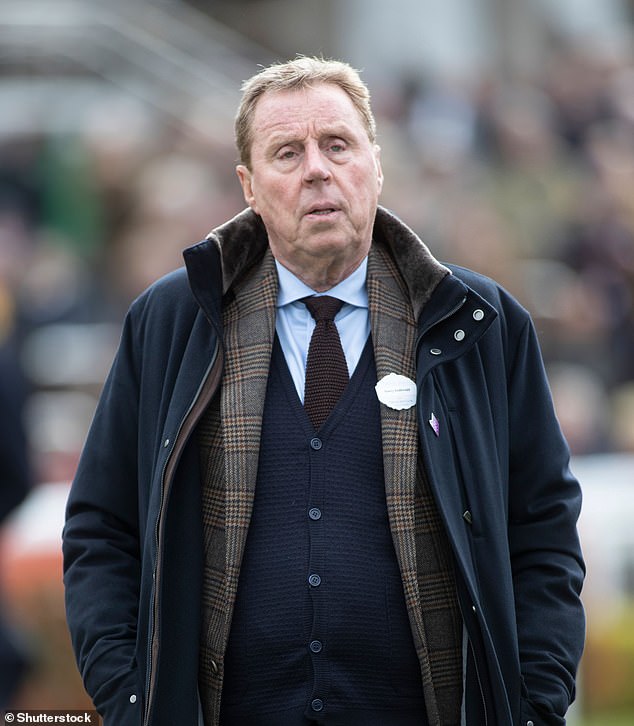 Redknapp is genuinely enthused by the animals themselves and says he is ‘OK’ with most outcomes of a race as long as his horses come back safely.

His involvement in jumps racing means he has suffered the ultimate heartbreak that befalls most who get involved with one of the most thrilling but also painful sports around.

‘I had a bad spell where I lost a few really good horses, you know.’

Most notably perhaps Bygones In Brid in 2012, which had gone off at Taunton as the second favourite before misjudging the first hurdle. 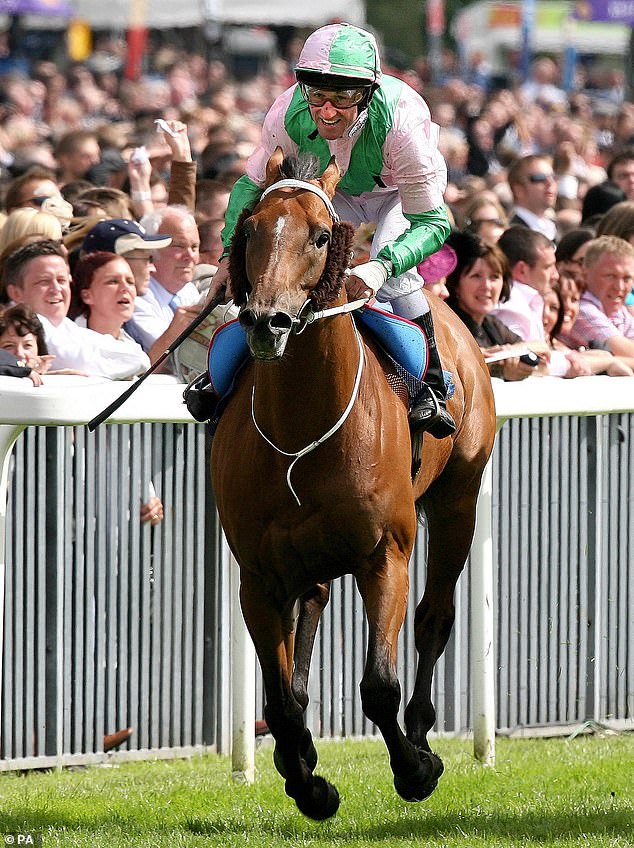 John Egan, one of Harry’s great friends in racing, will ride some of the syndicates horses 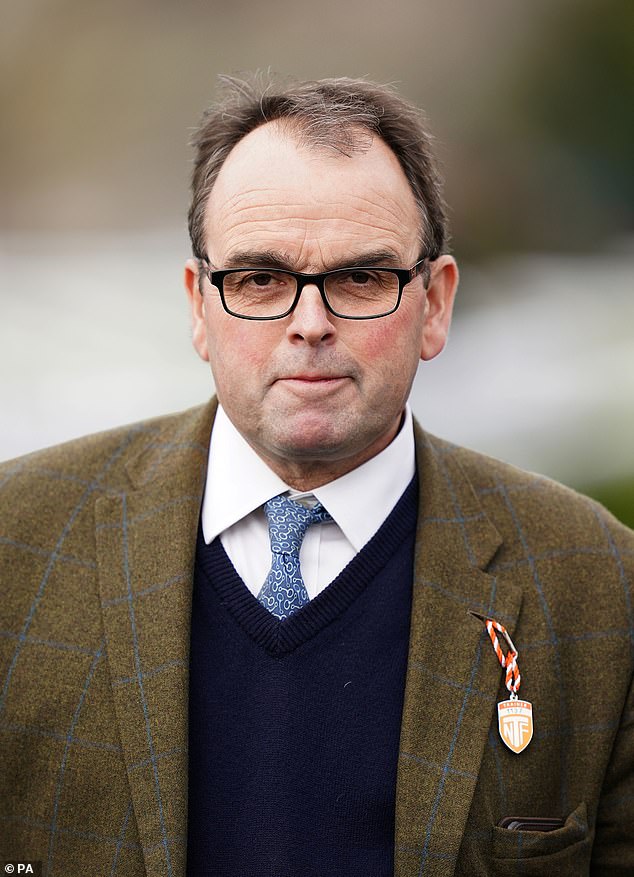 ‘Bygones In Brid for [trainer] Alan King, he fell at the first hurdle. Jumped off and the sun was low and just before the race [King] was saying he’s the best hurdler he’s trained for long time,’ he said.

Such are the highs and lows of jumps racing.

Redknapp, naturally, does not enjoy the ‘crushing lows’ but his long-time involvement in the sport, across jumps and the flat, means he understands it’s part of the game and his competitive spirit, spawned through years at the top of the English national game, means he can’t walk away. Horses like Moktasaab coming along only heighten his love for it.

His love and racing, and it has to be said, a bet, does seem innocent and he takes part purely for the fun of it.

What, then, does he think of reported attempts by the Government to introduce controls and potential source-of-funds checks? 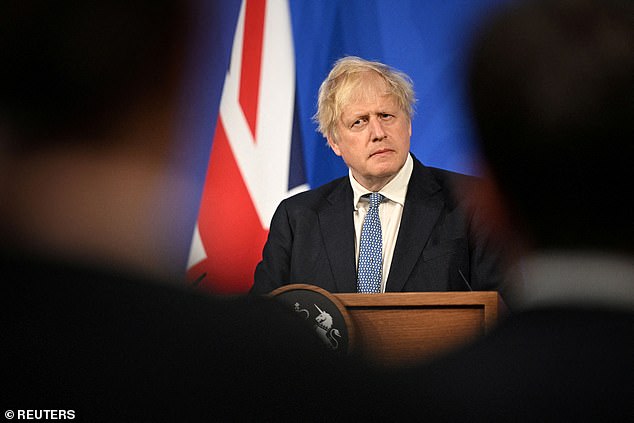 Moves to bring in gambling checks on source of funds are ‘crazy’, believes Harry Redknapp

It should be noted that Redknapp himself is an ambassador for BetVictor, something he acknowledges.

‘Suddenly they want to look at everybody’s earnings and wages, and I just don’t agree with it.’

As with his view on animals, however, Redknapp is empathetic towards those who suffer from something as crippling as a gambling addiction. 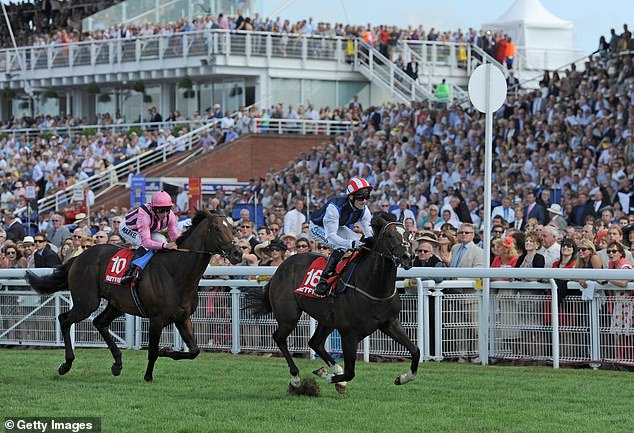 What did he do when one of his players came to him about any issue with addiction?

‘Gambling is not a wise investment, we’re not going to sit here and say you’re going to win over the long term because you don’t.’

‘The average person, you’re not going to win. It’s there, it gives you a buzz, a bit of fun, enjoy it. But don’t expect to make a fortune out of gambling,’ he added.

For Redknapp, though, there will be nothing like the buzz he will get on Friday should Moktasaab live up to its favourite tag.

‘Let’s hope we get a result on Friday, that’d be nice,’ he said.