Desert Crown does not have to improve much to win the Derby, claims Sir Michael Stoute as Richard Kingscote’s mount seeks to emulate Epsom success of legendary Shergar

Sir Michael Stoute believes Desert Crown does not have to improve much on his impressive Dante Stakes victory to win the Cazoo Derby a week on Saturday.

Desert Crown went into the Dante with expectations dampened by Stoute because the colt’s training had been disrupted. It was also just his second run, though he did win impressively on his two-year-old debut at Nottingham in November. He emerged an eye-catching winner by more than three lengths at York, which propelled him to the head of the Derby betting at 9-4. 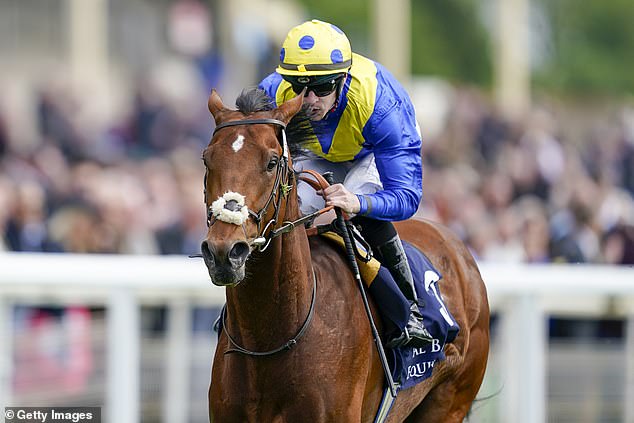 Stoute, 76, said: ‘It was a solid performance in a good time and he was very efficient. If you win the Dante you don’t have to improve much to win the Derby.

‘He is a nice athlete and has a lovely temperament but we had to learn something about him on the racecourse and it was a positive.

‘I certainly wasn’t confident. We were only just ready to go to the races as he had a hold-up with a bruised foot.

‘He won impressively at Nottingham last year, which surprised us. So he obviously does a little more on the racecourse than he does at home.’

LIONEL, the David Menuisier-trained winner of the Cocked Hat Stakes at Goodwood last week, could go next for the Irish Derby on June 25 rather than taking up entry options at Royal Ascot.

Menuisier said: ‘We’ll give ourselves a little bit of time, let the Derby run and see what’s what. But my first thought is to go for the Irish race.’