The John Gosden-trained colt, owned by Prince Faisal, made his stamina tell over the nine furlongs after the two US heavyweights, Charlatan and Knicks Go, had gone head to head in the early stages.

Egan was able to stay on their heels as the star pair turned for home. 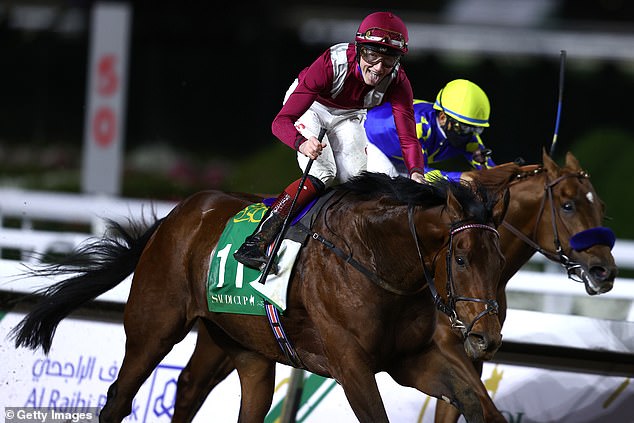 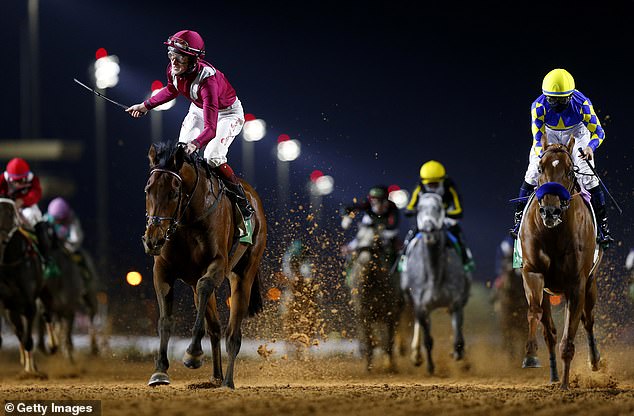 Knicks Go dropped away, leaving Mishriff to gradually reduce Charlatan’s lead and get up in the closing stages. Great Scot finished third.

Gosden said from his Newmarket base: “It was a wonderful performance. He showed a lot of grit and courage, and he was able to go the pace of the American horses. It was great.”

Now proven on dirt as well as turf, having won the French Derby last year, Mishriff would appear to have all the world’s biggest races open to him.

Bookmakers quoted him in their betting for next month’s Dubai World Cup while later in the year there is the Breeders’ Cup Classic.

The champion trainer was also quick to pay tribute to his team behind the horse and his preparation. 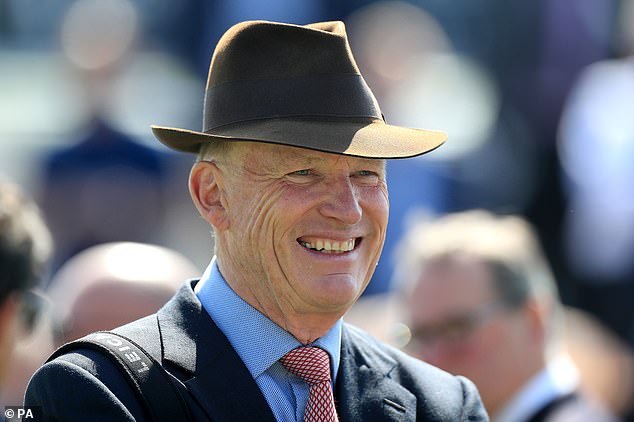 He said: “What a brave horse, thank you to Prince Faisal and the whole team.. It’s down to them and a brave horse, in what was a truly-run race and certainly he had to have a lot of courage never mind ability.

“His owner-breeder Prince Faisal always wanted to come back for the Saudi Cup (after finishing second in the Saudi Derby last year) and the horse had a perfect year bar getting stuck in a bottomless bog at Ascot (in the Champion Stakes), which was really specialist ground. Otherwise he has a superb record.

“The team here at Clarehaven have done a great job with him – it’s not easy to get a horse ready in the winter, with the snow and the ice.

“Any time you take on Bob Baffert with a horse of that class (Charlatan) you are pleased if you can get there, so full marks to my team.”

Reflecting on the race, Gosden said: “You do need to break well and get a decent position, David rode a positive race and in the end basically outstayed the American horses. It wasn’t a crazy pace, I was impressed the two American jockeys were containing their horses. You have a world-record miler there (Charlatan) and Brad Cox’s horse (Knicks Go) and they kept the rhythm right. 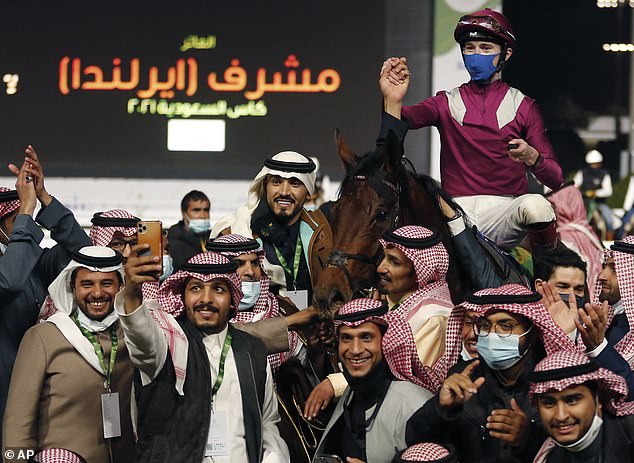 Egan celebrates after the race with the family of Prince Faisal, the owners of the winning horse

“There are very few horses who can switch surfaces like that, but I’ve always been told by the top American jockeys and Frankie Dettori that this is the best main dirt track in the world. I think that’s very much proven today – that a turf horse can actually switch to it and put in a big performance.. This is a superb track.

“I think he will stay (further), in the end he nailed them because he could go the pace and then just see it out to the end – and that’s a hard-run mile and a furlong.

“I’ll see, we’ll all make decisions together as to how he is and what plans, and discuss it all with Prince Faisal. Take it a step at a time. After a flight like that and training in the winter, we’ll how the horse is for the next 10 days, two weeks when we get back before we start making any grand plans.”

Circumstances meant Egan missed out on Mishriff’s last three races last year, including his victory in the French Derby, where Dettori was in the saddle. However, as Prince Faisal’s retained rider he was back in the plate. 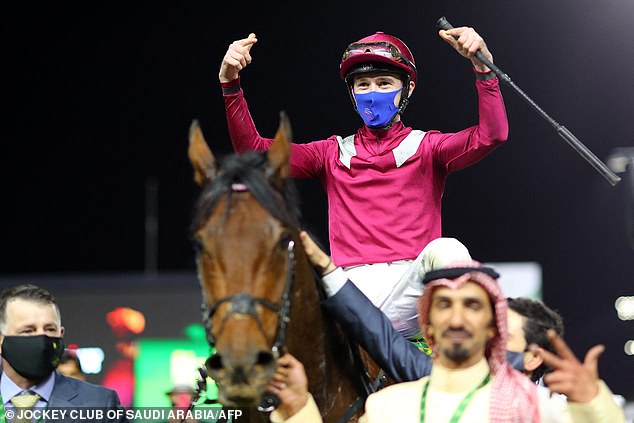 “It wasn’t meant to be (not being able to ride in French Derby). That’s racing. It was during the coronavirus pandemic as we all are now.

“I’d like to thank Saudi Cup for putting on such a great event in these tough times and making everything as Covid safe as we could be.

“I’m just delighted to get back on board Mishriff and win it for all the team.”

He went on: “Last year he was a horse that jumped slow. He chased down the Japanese horse in the Saudi Derby and finished second. I always thought if he jumped on terms I would have nearly won last year. 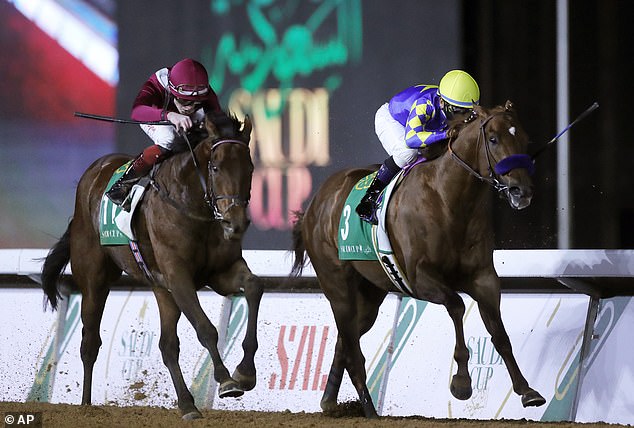 “He has matured through the year and Mr Gosden had him primed for today. He’s been training well on the track. He seems to enjoy the track here. He’s very relaxed in the mornings.

“He jumped as well as he’s ever done. I squeezed him along for the first 50 yards and I was surprised how well he was going down the back straight. I was on Mike Smith’s (riding Charlatan) heels.

“The only worrying sign I got was when they started quickening, but once we got into the straight I knew I was going to mow them down. Thankfully the line came in time for us.

“Ever since he was second here last year I’m sure it was on Mr Gosden and Prince Faisal’s mind to come back here. With this race in Prince Faisal’s back garden, it was a no-brainer. He’s taken on some top-class horses from all round the world and he’s proved how good a horse he is and how much he has matured mentally and physically. 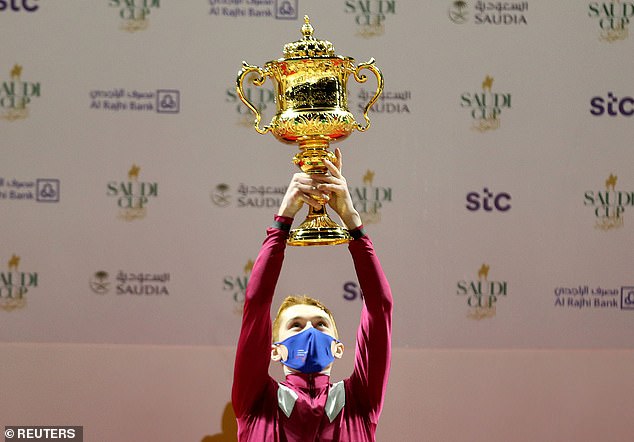 Egan hailed his father, also a jockey, for the support he has given him throughout his career

“With the amount of prize-money on offer it’s a huge deal, but going into the race I didn’t feel any pressure. It was just like going into any normal race.

“It’s only when you go past the line you realise what a big deal it is.”

Egan dedicated the triumph to his father John, also a jockey, who was on hand to witness the success.

“It’s so special dad being here,” he said.

“If it wasn’t for him I wouldn’t be the rider or the person I am today. He’s done everything he can to hep me in my career, pushed me and trained me hard and this one’s for him.