There was a clean sweep for the Irish in the JCB Triumph Hurdle, with Vauban powering to victory at Cheltenham and leading home four of his compatriots in the Grade One that turned into a speed test.

Paul Townend was always well placed, hunting the relatively sedate pace set by Porticello and Fil Dor before being produced wide off the final bend.

The Willie Mullins-trained Vauban was still on the bridle as he eased a length clear approaching the last and while he made a hash of it, landing on all fours, he soon regained his momentum. 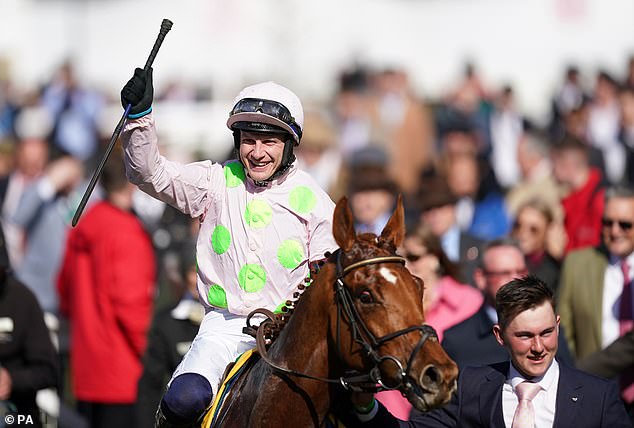 Townend still had plenty up his sleeve and the 6-4 favourite drew readily clear up the stands rail to score by two and a half lengths from Fil Dor, trained by Gordon Elliott, whose Pied Piper ran on a further neck back third.

Townend said: ‘We always said he was a work in progress and he’s improved every day and he can improve again.

‘We hadn’t planned to be in front at the last, but that is just the way it turned out. He had a look around and I knew there was loads there when I got to the back of it.

‘He’s a bit to learn, but he’s improving with every run. He’s got a very big engine.

‘He’ll have to jump a bit slicker for a Champion Hurdle, but that can be worked out at home. He’s definitely going the right way.’

Mullins said of the Rich Ricci-owned winner: Mullins said: ‘I’m delighted with that. He was able to win even without having the experience that he should have going into that sort of race. 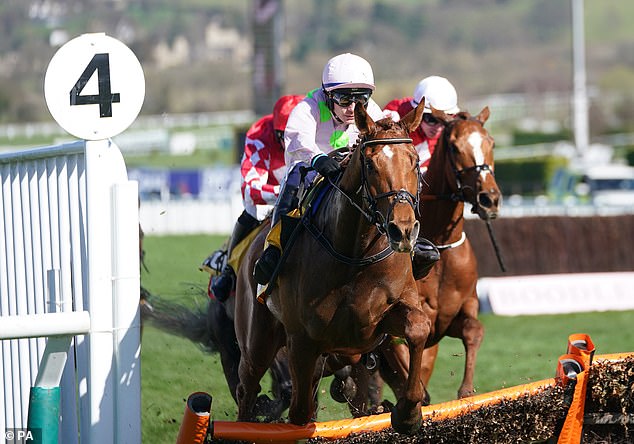 ‘You could see that when he hit the front. Paul said he was looking at everything and probably all the cameras on the landing side of the last hurdle and he just lost his impetus. But he picked up quickly again and went on like a good horse.

‘You’d have to think he could be a Champion Hurdle horse and he has a great Flat rating. I think he’ll improve with age and experience and with the Flat rating he has, he’ll be good enough to contest those cup races, I think.

‘I’ll have a word with Rich, but I’d imagine we’ll give him his summer off and then maybe hurdle next season and go Flat racing after that.’

‘Champion Hurdle winners in the previous generation went back Flat racing because they were top-class Flat horses. Those horses are not bought now because they’re bought to go to Australia and Dubai and places like that.

‘I’ve got a bit of unfinished down in Australia (in the Melbourne Cup), but I don’t think it will be this year. After Punchestown I think we’ll give him a break.

‘The Melbourne Cup is a particular itch we’d love to scratch. We’ve finished second, third and fourth in it over the years and it’s a race I’d love to win.

‘He has the credentials for it every day of the week. He’d be as good as any of those horses (we have run in the Melbourne Cup before).’ 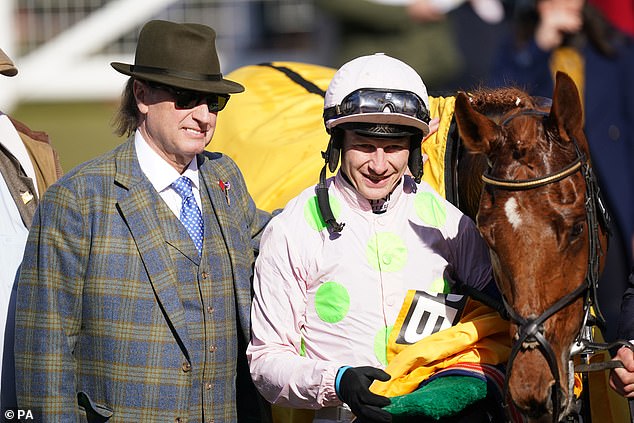 Ricci added: ‘Certainly with that performance the Champion Hurdle has to be in our plans.

‘We’ll have a chat, but I wouldn’t mind keeping him on the go a little bit. He’s lightly-raced. He’s a Listed winner on the Flat in France and he’d be a lot of fun on the Flat.’

Elliott said of his pair: ‘Both horses ran very well. We found it hard to split them at home and there was only a head between them at the line.

‘The winner was very good and he beat us fair and square, we’ve no excuses. Both horses jumped and travelled, they had the run of the race they just got beat by a better horse on the day.

‘They are two nice horses. Pied Piper could be a horse for Ascot on the Flat, we bought him with that in mind. Fil Dor could jump a fence.

‘I’m very proud of both, they both got great rides. We are hitting the bar a lot, but we’ve two on the board so I’m not going to complain.’