Twelve months on from being forced to watch the Cheltenham Gold Cup at home in Ireland, his name verboten at the biggest meeting of the season, Gordon Elliott stands on the verge of winning the top prize again with Galvin.

Elliott tasted Gold Cup victory in 2016 with Don Cossack but there were times last year — in the aftermath of a 2019 picture of him sitting on a dead horse being circulated on social media — when he must have wondered whether it would ever happen again.

The future of the stable he had built from scratch in County Meath to become one of the most powerful operations in Britain or Ireland, with over 200 horses, was threatened as he was suspended by the Irish Horseracing Regulatory Board for six months and had to hand over its running to caretaker trainer Denise Foster. 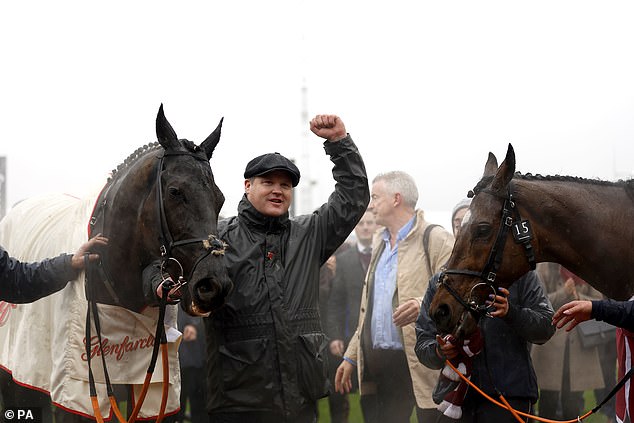 Twelve months on from being forced to watch the Cheltenham Gold Cup at home in Ireland, Gordon Elliott is on the verge of winning the top prize

Elliott, who was allowed to return in September, has spoken of his ‘moment of madness’ and the fact he will have to live with the consequences of his actions for the rest of his life.

But if he can win the Gold Cup again with Davy Russell-ridden Galvin, his rehabilitation within the sport will seem complete.

The eight-year-old has a lot going for him. A day and a half of bright drying weather will mean the course has had a chance to dry out significantly after 21mm (more than ¾in) of rain fell on already watered ground on Wednesday.

But there will still be an added emphasis on the stamina always needed in a three mile, two furlong and 70 yards contest.

Having won the 3m 6f National Hunt Chase at last year’s Festival, Galvin, who is owned by Scottish potato magnate Ronnie Bartlett, should be well equipped to cope. 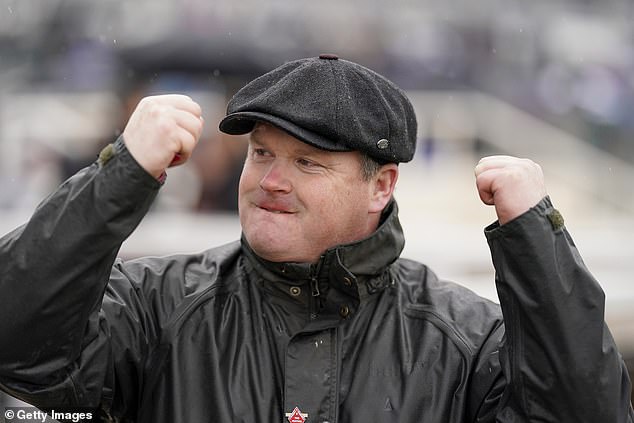 ‘If you go through the race there are question marks over every horse. He ticks a lot of boxes for the race. He’s a stayer, that’s what you need to win a Gold Cup.’

Ireland provided the 1-2-3 in last year’s race and all are back again with a chance but if Willie Mullins-trained Al Boum Photo, who won in 2019 and 2020 before his 2021 third place, was to make it a remarkable third success he will have to defy recent trends as no 10-year-old has won since Cool Dawn in 1998.

Last year’s runner-up, the Henry de Bromhead-trained A Plus Tard, will be the choice of many as he is the mount of Rachael Blackmore.

He looked imperious when winning November’s Betfair Chase at Haydock but was hauled back and beaten a short head by Galvin in the three-mile Savills Chase at Leopardstown’s Christmas meeting. Admittedly, the De Bromhead stable was not in good form at the time but given today’s greater emphasis on stamina Galvin must have a good chance of confirming his superiority.

It might be that De Bromhead’s winner last year, Minella Indo, will be the toughest nut to crack.

He comes alive at this meeting, with his other two Festival runs being a win in the 2019 Albert Bartlett Novices’ Hurdle and second in 2020’s RSA Insurance Novices’ Chase.

After a dismal run when he pulled up in the King George VI Chase at Kempton won by Tornado Flyer, there were positives for Minella Indo when he was second to Conflated in last month’s Irish Gold Cup.

He injured a hoof that day and was lame after the race. He will also relish the slower ground, as will Dan Skelton’s Protektorat, who is part-owned by Sir Alex Ferguson and ploughed through soft ground when winning the Many Clouds Chase at Aintree.

Nicky Henderson’s Chantry House is a previous Festival winner but looked very laboured when winning the Cotswold Chase at Cheltenham in January.

Elliott has had two winners this week. After Commander Of Fleet gave him his first success since his Festival exile in Wednesday’s Coral Cup, he said: ‘Every winner is important to me whether it is Down Royal, Downpatrick, Newton Abbot or Cheltenham — all I care about is training winners.’

That is true but it is hard to believe, after all Elliott has been through, that a Gold Cup win for Galvin will not mean so much more.

Elliott was last night sweating on the fitness of Russell, 42, who missed his last two rides yesterday after a fall on Conflated in the Ryanair Chase. Elliott said: ‘He’s a bit sore. Hopefully he will be OK.’