Willie Mullins is not frightened of Shishkin ahead of the Queen Mother Champion Chase and looking forward to having another crack at Cheltenham, says Nicky Henderson, who also claims he is ‘playing games’

Nicky Henderson says Willie Mullins is ‘playing games’ when he says he doesn’t know how he can beat Shishkin in the Queen Mother Champion Chase at Cheltenham on March 16.

Energumene, trained by Mullins, looked to be holding off Shishkin in the Clarence Chase House at Ascot last month, before Henderson’s chaser came through to win by a length and extend his unbeaten record over fences.

The pair face a rematch at Cheltenham with Energumene’s stablemate Chacun Pour Soi, an impressive winner at the Dublin Racing Festival this month, also in the line-up. 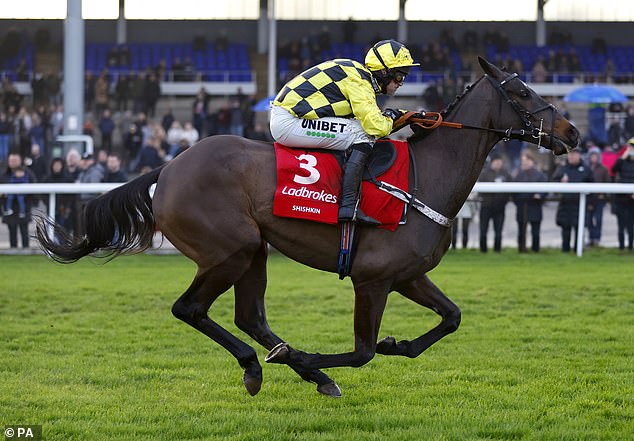 At 4-6 favourite, Shishkin is the shortest-priced British-trained runner at the Festival. But Henderson does not consider Nico De Boinville’s mount banker material the way he did Sprinter Sacre and Altior, when those two illustrious competitors each twice won the Champion Chase, a race Henderson has taken six times.

Henderson said: ‘Willie says he doesn’t know how we will beat Shishkin but I think he is playing games because I know perfectly well he is looking forward to having another crack. I don’t think he is that frightened. A length is not much.

‘It was great we came out in front but there wasn’t that much in it and it looked like he had us in trouble.

‘If one had won by 10 lengths, you’d have said it would have wrecked the Champion Chase, but it hasn’t and it has left the door wide open.

‘Willie is also going to chuck in Chacun Pour Soi as well and you never want to underestimate him.’

Henderson’s 70 Festival wins are second to Mullins (78). Henderson said he was getting ‘good vibes’ from 2020 Champion Hurdler Epatante but admitted she faces a tough task clawing back her crown from reigning champion Honeysuckle. His Festival squad also includes Chantry House (Gold Cup) and Champ (Stayers’ Hurdle).