Trainer George Boughey lands his first classic with Cachet after filly holds off late charge by Prosperous Voyage in Qipco 1,000 Guineas at Newmarket

George Boughey underlined his status as an emerging force in Flat training when Cachet held off the late thrust of Prosperous Voyage to land the Qipco 1,000 Guineas at Newmarket by a length.

It was a first Classic win for Boughey, 30, who only started training in July 2020 with four horses in his care.

You can multiply that number by 25 now and Boughey, whose only previous Classic runner was 2021 Oaks runner-up Mystery Angel, has a filly on his hands in Cachet who looks set to contest some of the biggest mile races on the calendar. 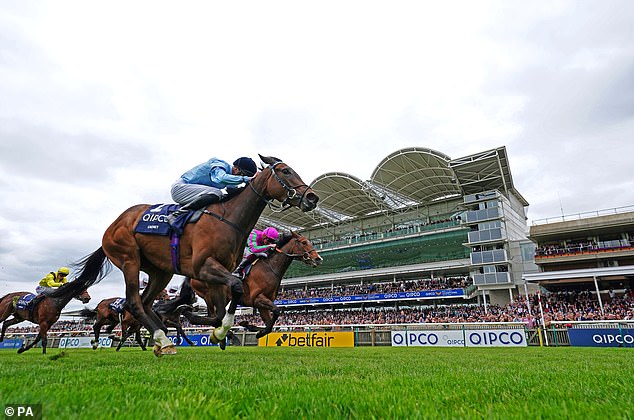 Cachet held off the late thrust of Prosperous Voyage to land the Qipco 1,000 Guineas

Cachet, a 16-1 shot owned by 20 members of the Highclere Racing syndicate, completed a memorable weekend for jockey James Doyle.

He went into it without a British Classic win and emerged with two after he also partnered Charlie Appleby-trained Coroebus to victory in Saturday’s 2,000 Guineas.

But the focus yesterday was on Boughey. He said: ‘It’s just bizarre to win a Guineas. Two years ago I was only dreaming of having a winner at Bath, no disrespect to Bath!

‘I absolutely didn’t think I’d be here so soon. It’s a huge thrill.’

Boughey, a former assistant to Hugo Palmer, has never made a secret of how highly he rates Cachet and he campaigned her aggressively as a two-year-old, running her eight times.

She only won twice but her efforts included third in the Fillies’ Mile at Newmarket and fourth in the Breeders’ Cup Juvenile Fillies’ Turf at Californian track Del Mar. 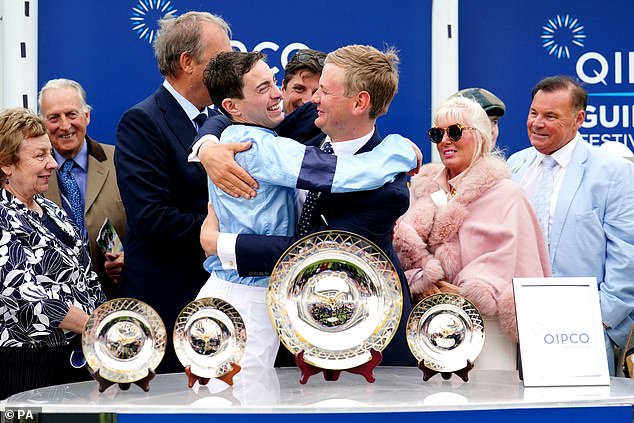 Those runs, plus a winning seasonal comeback in last month’s Nell Gwyn Stakes at Newmarket, made Cachet one of the most experienced fillies in the 1,000 line-up and Doyle reckoned her experience was crucial as she made all the running, injecting pace three furlongs out before hanging on.

The Coronation Stakes at Royal Ascot is likely to be next for Cachet and, longer term, Boughey has his eye on a return to the Breeders’ Cup.

He added: ‘The fact she likes fast ground makes her a global filly, which is huge for us.’

Aidan O’Brien-trained Tuesday was beaten two lengths in third but stablemate and 11-4 favourite Tenebrism was only eighth. Strangely for a course winner, she looked all at sea, rolling around running into the Dip and being eased by Ryan Moore when he knew his chance had gone.