Bay Bridge laid down a marker for the Prince Of Wales’s Stakes at Royal Ascot on June 15 when storming to a five-length win in the Coral Brigadier Gerard Stakes at Sandown on Thursday night.

It was an 11th win in the race for trainer Sir Michael Stoute and a massive fillip for his stable ahead of the 10-time champion trainer saddling favourite Desert Crown in the Derby at Epsom next Saturday.

Jockey Ryan Moore did not have to get too serious on the 7-4 shot, who was having only his seventh career start, as he left favourite Mostahdaf floundering. 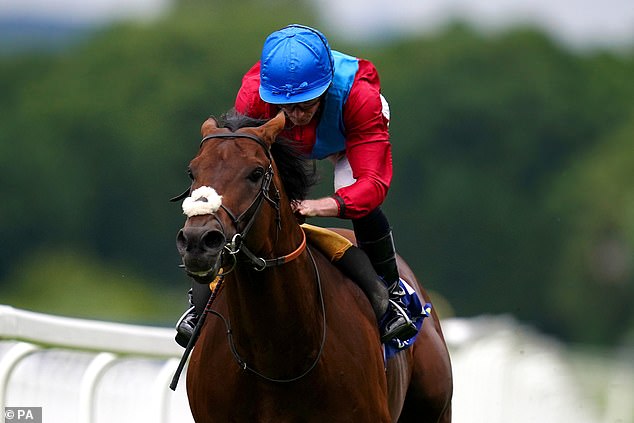 Bay Bridge has now won his last five races and Stoute’s patience with the lightly raced four-year-old could be set to reap rewards in the summer’s premier middle-distance events.

Moore said: ‘You’d be delighted by what he did there. It was his first run of the year, he picked up very nicely and went through the line well.

‘He had a few issues last year and we had to wait. He seems to step forward every time. I’d be hopeful he can carry on doing that. He has beaten some very solid horses so there is plenty to look forward to.’

Meanwhile, Tom Marquand, who won the Henry II Stakes on Quickthorn, has picked up the Derby ride on the Charlie Hills-trained outsider Sonny Liston.

Quickthorn is not entered in the Ascot Gold Cup and trainer Hughie Morrison, Morrison said his shot back at Group One level would probably be in the autumn, when he should get his preferred soft ground. The Prix du Cadran at Longchamp looks the target.