Rob Hornby has worked 10 years to become an overnight success but now things have clicked he wants to make the most of every opportunity, including his first Cazoo Derby ride on Westover at Epsom on Saturday.

This time last year, the 27-year-old had only just returned to action and was worried that missing the first four and a half months of the year after a shoulder operation would derail his momentum.

But he registered his first Group One win on Scope in the Prix Royal-Oak at Longchamp for Westover’s trainer Ralph Beckett and last month was within a neck of his first Classic win, when 33-1 shot Prosperous Voyage was second in the 1,000 Guineas. 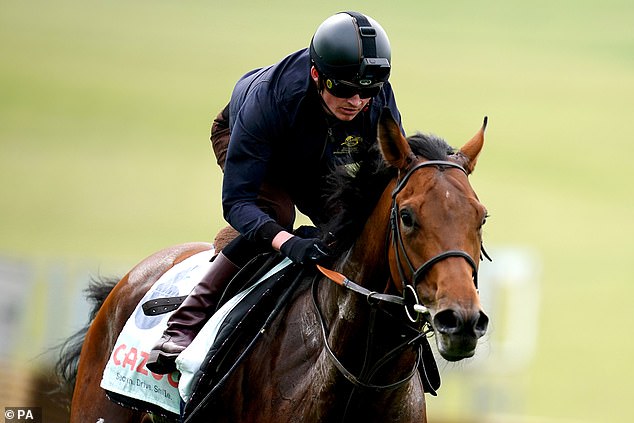 Hornby said: ‘Nothing ever happened overnight for me. When I was an apprentice with Andrew Balding I was a bit of a slow burner.

‘I went there with the likes of Oisin Murphy, Kieran Shoemark and Dan Muscutt. Oisin was more talented and had more experience but even though people were coming through and moving past me, I learned a great deal.

‘I was always confident that the opportunities would come my way when I was ready. I have worked hard to get there but still don’t think I’ve cracked it.’

Hornby was also successful on his first ride for Beckett, but his milestone success on Scope, one of the contenders for the Ascot Gold Cup this month, wasn’t the experience he had envisaged.

Hornby said: ‘I rang my mum straight away. She hadn’t even watched it. She was out shopping at Aldi. She had a minor breakdown in there!

‘I remember getting back to the airport. I went into a coffee shop and was on my own. I thought, “This is not how I saw how my first Group One would go”.’

Hornby said: ‘His Sandown win seems a long time ago now, but what he did on his first run of the year was massively encouraging.

‘Once I got him organised he battled well to the line and the step up in trip should suit him.’

There will be no need for phone calls to shopping relatives if Hornby can pull off a dream Derby win. His close family will be at Epsom to cheer him on.

But he will also be thinking of his late grandmother Margaret, who fostered Rob’s love of horses and racing as well as providing his most unusual fan.

Hornby recalled: ‘She would have been very proud of me. She watched my races every day. ‘She also bought a parrot which repeated all the commentaries. When nan was getting excited, she’d shout, “Come on Robbie”. The parrot would go mad saying the same thing. It was hilarious.’