Bryony Frost ended the most difficult week of her career being cheered into the winner’s enclosure at Sandown after victory on 12-1 shot Greaneteen in the Grade One Betfair Tingle Creek Chase.

Last Wednesday, Britain’s most successful female jump jockey had endured a tearful and emotional few hours being questioned at the BHA disciplinary enquiry into claims that she had been bullied and threatened by her fellow rider Robbie Dunne.

The hearing was adjourned on Thursday and will re-open for potentially three more days of evidence of Tuesday. 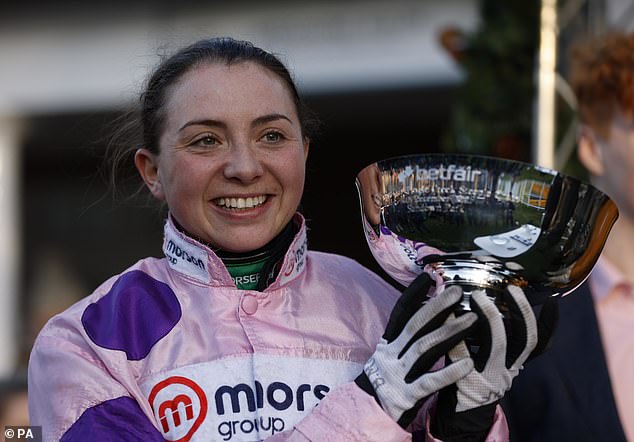 But the backing Frost has among the public was evident as she received three cheers, with one female member of the crowd shouting: ‘We support you Bryony, you’re doing a great job’.

Frost said: ‘I can’t tell what it means. I was nearly in tears coming back in. To feel the support of everyone here is huge. They appreciate me. I ride horses and it is the best life. To say that I do that as a job is quite special.

Irish raider Chacun Pour Soi, ridden by Frost’s boyfriend Patrick Mullins and trained by his father Willie, had been the 8-13 favourite but finished last of the five runners. 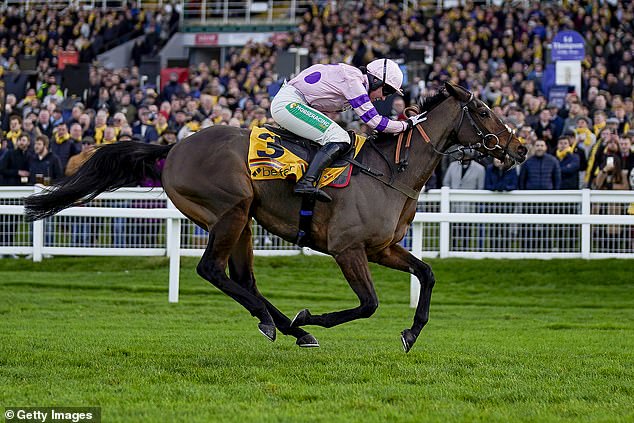 Patrick said he ran as if he was ‘feeling something’ and he looked in trouble after clobbering the sixth-last fence.

The race ultimately turned into a battle between the Paul Nicholls-trained stablemates, with Greaneteen beating Hitman, also 12-1, by five-and-a-half lengths.

Nicholls said: ‘Bryony has had a few little issues off the course and on the course but that will be behind her soon and she will keep riding winners like this. It will soon be history. Top girl.

‘It has been a difficult week but she has handled it well. I don’t think anyone would like to be in that position but to come back here and ride a Grade One winner says everything about her and what a professional she is, so full marks to her.’ 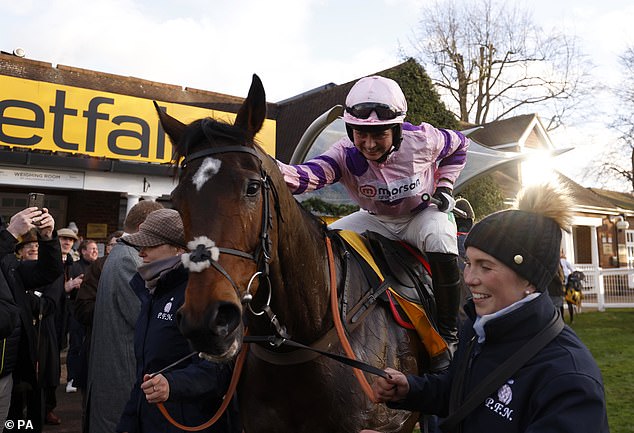 Asked if he had had to put a comforting arm around Frost, Nicholls added: ‘I think Paddy Mullins has been doing that so I haven’t needed to!’

Greaneteen had been seven lengths second behind another stablemate, Politologue, in the 2020 Tingle Creek. He beat now retired Altior in the Celebration Chase at Sandown in April but not many had seen him as a contender for the Queen Mother Champion Chase at Cheltenham in March until his display yesterday.

He is now a 6-1 shot with many bookmakers and Nicholls, on his first day out after having to isolate for 10 days following a positive Covid test, said: ‘He is improving enormously all the time.’

Nicholls completed a Sandown treble with further victories from Highland Hunter and Samarrive.