Paul Nicholls knows which battles to fight with his horses and is hoping the long-term plan to run Frodon in the Irish Gold Cup at Leopardstown will pay off.

Back in October after Frodon won the Champion Chase at Down Royal, Nicholls reckoned the Grade One prize run at a time when many have an eye on next month’s Cheltenham Gold Cup might prove the perfect target for a horse who has not been given any Festival entries. 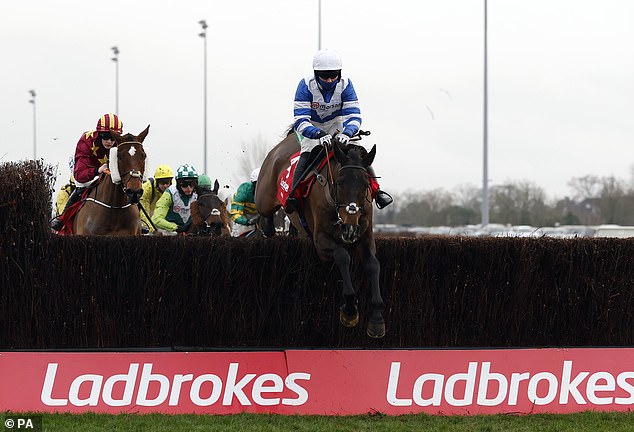 Nicholls said: ‘It’s a race worth a lot of money and a lot of the top players aren’t in it. I always thought it would be perfect for Frodon. When we had Kauto Star and Denman it didn’t matter, you ran them where you wanted. They were the best and they’d win.

‘With horses like Frodon, you know where you are in the ladder of the top horses and you have to place them accordingly.’

Bryony Frost’s mount is 5-2 favourite to bounce back from his fourth place when trying to win a second King George VI Chase at Kempton when he and Minella Indo got embroiled in a draining and self-defeating early pace battle.

Trainer Henry de Bromhead said the race drained Minella Indo, who will be ridden for the first time by Robbie Power, but he has seen positive signs in the countdown to the race. 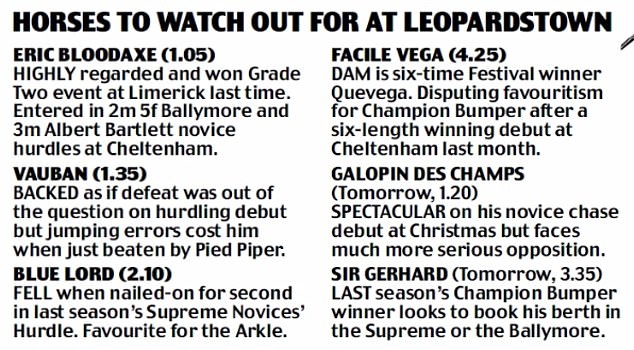 Kemboy is a big danger to Frodon but Nicholls said his main worry is the form of his string, with only three wins from his past 45 runners.

Nicholls said: ‘Some of the horses have been disappointing and I can’t put my finger on why. We haven’t found anything wrong with them and have been surprised by the way some have run but we all go through quiet spells.’

Nicholls, whose previous three runners in Ireland have all won, is the only British trainer with entries at the two-day Dublin Racing Festival. His other runner is Tingle Creek Chase winner Greaneteen, who faces a rematch with Chacun Pour Soi in tomorrow’s Dublin Chase.

De Bromhead’s Honeysuckle is the main feature on day two as she bids to win the Irish Champion Hurdle for the third year running and extend her unbeaten record to 14 races.