He is the most recognisable meme in Australian history and now the ‘Democracy Manifest’ man has inspired the naming of a champion racehorse.

When Brisbane artist and actor Cecil George Edwards was arrested by Queensland Police at a Fortitude Valley Chinese restaurant in 1991, his reaction became an internet sensation.

While he was forced into a police car, he said in a commanding voice, ‘This is Democracy Manifest,’ ‘Get your hand off my p****!’, ‘I see you know judo well’ and ‘What is the charge? Eating a meal? A succulent Chinese meal?’

It claimed victory in the Grainshaker Vodka Handicap in race seven at Warwick Farm on Monday, its second win in just five starts.

The race caller had obviously seen the video, because he took the opportunity to celebrate Democracy Manifest’s victory in appropriate style.

‘Democracy Manifest is getting his split … moved up to meet Italian Informant,’ the race caller said as the horses hit the final straight.

Then came the hilarious moment.

‘Gentlemen, this is Democracy Manifest!’ the race caller said as the gelding crossed the line a clear winner. ‘Succulent Chinese meals all round!’

‘It took six officers to restrain him, his major concern was the meal that he’d left behind,’ Chris Reason said.

Edwards was later released without charge and theories have since swirled that he was mistaken for Hungarian chess player Paul Charles Dozsa, who was wanted for a string of dine and dash incidents around the world. 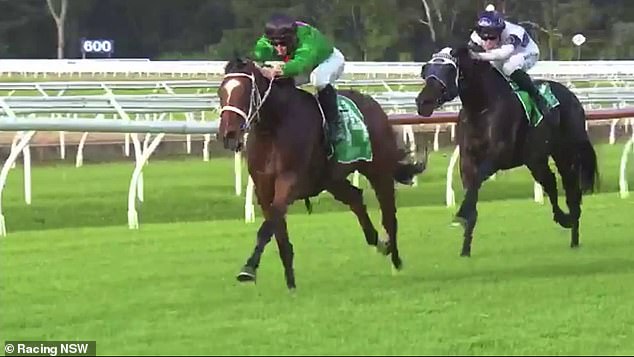 In 2021, Edwards spoke to Seven about the incident and why he chose such colourful phrasing to protest his arrest.

‘We were enjoying a succulent meal with many glasses of the old grape juice, the red grape,’ he admitted.

‘There was a suspicious-looking character a couple of tables away looking at us. Every time I would turn, he would put his head down and pop a dim sim into his gob.

‘The police fell on the place, come running in, one of them had a gun in his hand and I said, “What the devil is going on here?” 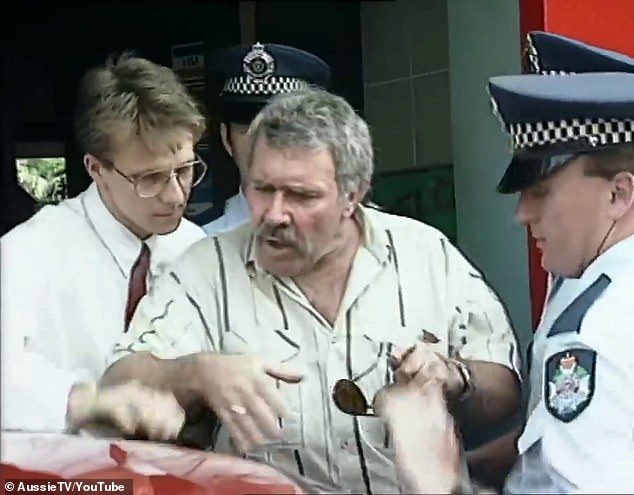 ‘Get your hands off my p****. The arrest of Edwards has been shared millions of times because of his hilarious, theatrical statements

‘[They said] “Get up, you’re under arrest. You’re an international criminal.”

‘I said, “I’m just a poor, struggling artist, how dare you!”

‘They took me out and there was all these TV cameras outside and there it is, that’s what you see on the internet now.

‘We are supposed to be living in a democracy and here they are dragging me out of a restaurant after enjoying – halfway through – a succulent Chinese meal.’

Edwards was back at the restaurant that same afternoon after making bail and was ultimately never charged.