Jonbon showed that his hefty price tag should not be an anchor of unachievable expectations when cruising to a six-length win on his hurdling debut at Newbury on Friday.

The Nicky Henderson-trained gelding was immediately cut to 5-1 second favourite by the sponsor for the Sky Bet Supreme Novices’ Hurdle at the Cheltenham Festival in March.

That was the sort of target owner JP McManus would have hoped Jonbon could aim for when he paid £570,000, a record for a point-to-pointer sold at public auction, 12 months ago. 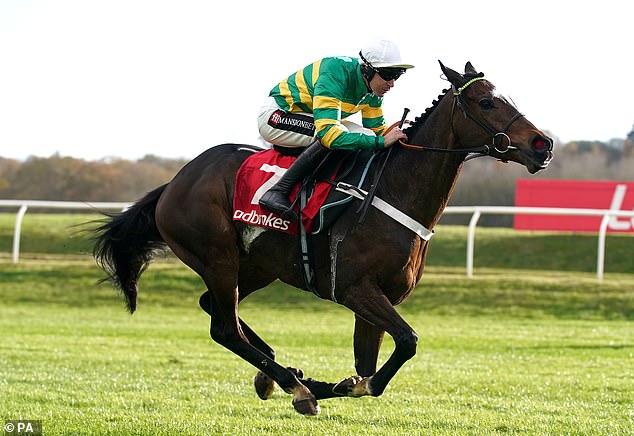 Interest in Jonbon had been intense because he is a brother to Douvan, the Willie Mullins-trained eight-time Grade One winner.

Jonbon had won a National Hunt Flat race at Newbury in March when Covid protocols meant there were no crowds at the racecourse.

An edgy temperament had led to some nervousness as Aidan Coleman’s mount encountered hurdles and spectators for the first time and the 10-11 favourite was fitted with noise-dulling earplugs ahead of brushing aside a useful yardstick in runner-up Good Risk At All.

Reacting to the news that only Mullins-trained Kilcruit, who won the Grade One bumper at the Punchestown Festival in April, was ahead of Jonbon in the Supreme betting, Henderson said: ‘I’m not surprised, that was always going to happen. His jumping took him there and he was only in second gear.

‘He is a brother to Douvan so it is no surprise he has plenty of boot. He was better today but he was on his toes. I would call him a fidget.’

Henderson’s prime focus this afternoon will be the return of Epatante in the Fighting Fifth Hurdle at Newcastle.

In the off-season, Epatante has been treated for a back issue which Henderson reckons may have been causing her some discomfort.

He said: ‘It looked that way. Her jumping said something. She was brilliant at Newcastle and then it fell to pieces. We have ironed out a few things since last year.

‘Her back has always been a problem and that is what we concentrated on.’

It should be an illuminating weekend for the Champion Hurdle picture, with Honeysuckle making her seasonal debut under Rachael Blackmore in the Hatton’s Grace Hurdle at Fairyhouse as she bids to extend her unbeaten record to 13 races.