Emily Upjohn showed she is an upwardly mobile filly when powering to the head of the Cazoo Oaks betting with a five-and-a-half-length victory in the Tattersalls Musidora Stakes at York.

John Gosden, who trains the daughter of Sea The Stars with son Thady, paid a handsome compliment to Emily Upjohn when drawing a favourable comparison with The Fugue, his 2012 Musidora winner who went on to be an unlucky-in-running third behind Was in the Oaks.

Emily Upjohn, who was running for only the third time and is named after a character in the Marx Brothers film A Day At The Races, is 13-8 favourite with Sky Bet to give the Gosden team a fourth Oaks and her jockey Frankie Dettori a seventh in the Epsom Classic on June 3. 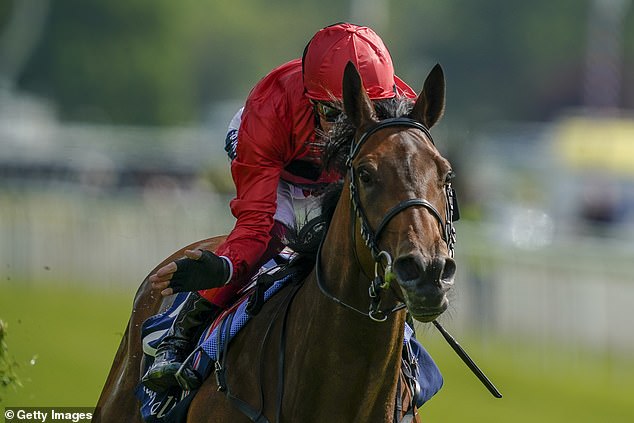 Gosden said: ‘I would say she is in that (The Fugue) class. It was a nice solid field and she has picked up well. It looks like a mile and a half will be right up her alley. There is plenty of stamina in her family.

‘She is a tall girl but she has great balance.’

To allow Emily Upjohn, well bought for £63,000, to get accustomed to the Epsom gradients she will be taken to the ‘Breakfast With Stars’ event a week on Monday to exercise around Tattenham Corner.

Dettori said: ‘She is still learning and she is getting there. Every race she is improving. She has won a trial by five and a half lengths so I am delighted.’

John Quinn-trained Highfield Princess has the Platinum Jubilee Stakes at Royal Ascot in her sights after her clear-cut win in the 1895 Duke Of York Stakes under Jason Hart.