Joe Tizzard has delayed plans to take over the trainer’s licence from his father Colin at the family stable in Dorset until the end of the season.

Previously, 65-year-old Colin had spoken about handing over to his son this autumn.

But Joe said: ‘It’s a two-month thing (to switch a licence) when you put the application in so we are going to leave it until next year.’ The Tizzard team was out of form last season with a return of only 37 winners. 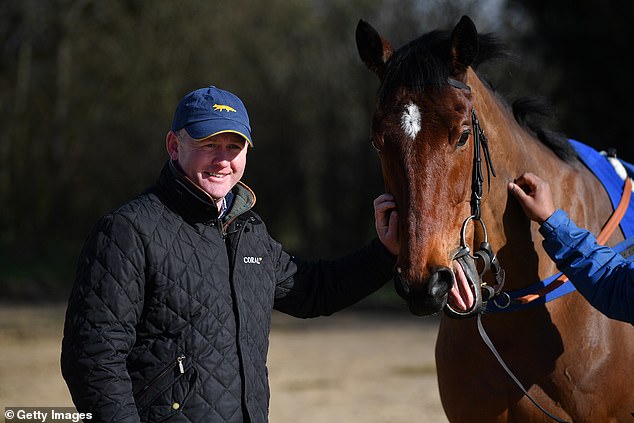 They already have 23 on the board this season and the fact Joe would have to start from scratch if he took over has also been a factor in the decision. Joe added: ‘There is no point going back to nought at Christmas.’

The Tizzards will be represented in the Ladbrokes Trophy Chase at Newbury on Saturday week by recent Carlisle winner Fiddlerontheroof and Copperhead, who was pulled up in the race last year.

Both horses attended the gallops morning at the track along with stablemate Lostintranslation, the 2019 Betfair Chase winner.

Lostintranslation was last seen pulling up in the Cheltenham Gold Cup and is entered at Ascot on Saturday but could be saved for the Many Clouds Chase at Aintree next month.

Joe is adamant Copperhead and Lostintranslation were among the worst affected last season by an underlying virus that blighted the stable but they are showing positive signs now.

He said: ‘They weren’t able to run a good race last season. They had a few little issues but I think they are back to where they were.’