Jockey Tom Eaves flies to California on Monday hoping he can scale a racing Everest for the second time in the Breeders’ Cup on Saturday.

Eaves and Glass Slippers beat the US speedsters in their own back yard last year when becoming the first European challenger to win the $1million Turf Sprint in the race’s 13-year history.

The 40-year-old Wigan-born jockey on his Breeders’ Cup debut pulled off one of the rides of the season with a ground-saving, rail-hugging run in the five-and-a-half-furlong race at Keeneland. 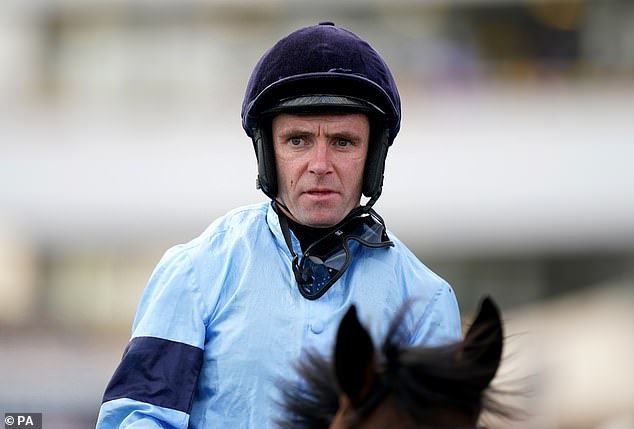 But with Saturday’s race run over half a furlong shorter on the tight Del Mar racetrack, the task facing Eaves and Kevin Ryan-trained Glass Slippers, who finished third to fellow Turf Sprint challenger A Case of You in the Prix de L’Abbaye at Longchamp on her latest run, appears to be even steeper. Eaves said: ‘It was a day I will never forget last year. Everything went right. We got a good start, which is very important in America, and a lovely run round. The gaps all came at the right time which they have to do in those big races and the filly was brilliant on the day.

‘The pace was strong which was what I expected but it was still the same as any race — you have to get into a rhythm. It is five furlongs rather than five and a half on Saturday. That said, Glass Slippers shows plenty of speed.

‘Kevin is very happy with her and she has put three good runs together this season. It was just too soft for her in France.’

Glass Slippers’ opponents include Ryan-trained stablemate, Haydock Sprint Cup-winner Emaraaty Ana. If Glass Slippers wins, she would extend an amazing statistic for Eaves, who rode his first winner in 1999.

Opportunities at the highest level do not come along too often for the rider who largely plies his trade on the northern circuit. But he has managed five Group One wins and all of them have come overseas.

Eaves said: ‘I travel well like the filly! I don’t mind where they are as long as we get them.’

A big week of international action kicks off early tomorrow morning (4am UK time) when Andrew Balding-trained Spanish Mission is the only British-trained runner in the Melbourne Cup in Australia.

Meanwhile, Joe Tizzard hinted next month’s Ladbrokes Trophy Chase at Newbury could be the next race for Fiddlerontheroof after he won a competitive running of the Colin Parker Memorial Chase at Carlisle yesterday.

Fiddlerontheroof won once but finished second five times last season including to Monkfish in the Brown Advisory Chase at the Cheltenham Festival.

After the gelding beat Pay The Piper a length and a quarter ridden by Brendan Powell, Tizzard, who assists his trainer father Colin, said: ‘We may want to take advantage of his (handicap) mark.’

The Ladbrokes Trophy Chase target has also been described as tempting by trainer Dan Skelton for Shan Blue, who was 20 lengths clear when falling three out in Saturday’s Charlie Hall Chase at Wetherby.