There can have been no finer example of reward for effort than the Prix de l’Arc de Triomphe victory of Alpinista (GB) (Frankel {GB}). Not only for the mare herself, slogging through the Longchamp mud with five Group 1 wins already to her name, but for her trainer Sir Mark Prescott and owner-breeder Kirsten Rausing, who have collectively a century of experience in this great sport between them. Then there was her jockey, Luke Morris. Not the most fashionable member of the British weighing-room, but certainly the most worthy, for barely a day goes by that he is not grafting away and, since 2011, not a season has passed without Morris riding at least 100 winners.

Ironically, 2022 was by one measure his least successful season for the last 12 years, as his final tally was ‘only’ 103 winners. But it was of course his most significantly prestigious year, with his gallant grey partner providing him with three Group 1 victories, in France and Britain, to add to the trio of German Group 1 titles collected the previous year, culminating in one of the most emotional Arc victories in living memory.

“Going to Longchamp on that day, I’m realistic enough, I know I’m not really going to ride a favourite or a second favourite probably in the Arc again in my career,” he reflects. “So I was very relaxed about it and I just wanted to enjoy the day, enjoy the moment. And I’d gone through everything with a fine-tooth comb, and I just wanted to leave no stone unturned. Because you only get one shot at these sort of things. So it was so nice when everything worked out exactly how we hoped and how we planned, really.”

Alpinista is not, of course, the only good horse with whom Morris has been associated in a riding career which is heading towards the 20-year mark. Gilt Edge Girl (GB) (Monsieur Bond {Ire}) was his first Group 1 winner, at the same track, for Clive Cox in the Prix de l’Abbaye back in 2010. Six years later he was back at ‘lucky Longchamp’ to claim the same race aboard the Prescott-trained Marsha (Ire) (Acclamation {GB}). That lightning-fast filly would go on to win another two group races the following year, including the G1 Nunthorpe S., but even her achievements must pale slightly when set against the record of Alpinista, on whose dam Alwilda (GB) (Hernando {Fr}) Morris won three races, and whose grand-dam Albanova (GB) (Alzao) was another to heap Group 1 successes on Prescott’s Heath House Stables.

Morris says, “I’ve ridden lots of the dams of the fillies we get from Lanwades and Miss Rausing. And, for me, it was hugely rewarding to be able to almost repay the faith that Sir Mark and Miss Rausing had put into me by giving me the job with Sir Mark at a very young age. I think it was only my second year out of my claim and I had ridden a Group 1 winner but I hadn’t had many opportunities in big races. Sir Mark gave me opportunities for big owner-breeders at a young stage of my career. And to be able to repay him and Miss Rausing was something special to me.”

An Arc victory would be a highlight on any jockey’s CV, but one senses that Morris takes pride in every winner. Last week he reached another important milestone in his career when riding his 2,000th winner in Britain, a feat which has only been achieved by five other jockeys currently riding in the country: Frankie Dettori, Joe Fanning, Paul Hanagan, Ryan Moore and Jamie Spencer.

“Last year was a year I’ll never forget,” he says. “And to ride 2,000 winners has been on my radar for probably a couple of years now. There are five or six other jockeys who are still riding who have done it and I think just about every one of them has been a champion jockey. So it’s something I’m immensely proud of, and it just spurs me on to keep working harder to ride more winners, and to try and ride good winners as well.”

It is hard to imagine how Morris would find the time to work harder than he does already. While many of his contemporaries in the weighing-room are enjoying less taxing winter-riding gigs in warmer climes, he is driving through the freezing fog currently engulfing Britain to take full books of rides on the all-weather tracks. As we speak, he is about to head to Southwell’s evening meeting to ride six horses for six different trainers. It is the kind of punishing schedule a jockey on the way up must adhere to if the rides are available, but the tall, lean Morris, now 34, has long since proved his worth. His right foot does not look like it will be easing off the accelerator any time soon, however.

“Weight-wise, I’m quite lucky in that I naturally sit around 8st 4, so generally I don’t have to sweat or lose too much weight, but being busy all the time just means I never really get the chance to put any weight on, so that suits me well,” he says. “And since I first started out, from my first, probably even before my first ride, I always had a fear of failure. So I’ve never given myself a chance to fail, really.

“I remember the days when I was 12 or 13, I used to ride out every day before school for Michael Bell, and even when we had the six-week summer holidays, I told my parents I wouldn’t be allowed a day off. Because it was more important that I was in there riding out every day, rather than going on a family holiday.”

Plenty of parents would be delighted to see a similar work ethic in their teenage children, and Morris’s dedicated approach is clearly one which sits well with his long-term employer, who expects loyalty from those connected to his stable, but gives the same in return.

“Sir Mark has had three jockeys in 53 years of training,” notes Morris, who followed George Duffield and Seb Sanders in the role. “He expects you to be extremely professional, to work hard, and he’s the same. So, like I say, I can’t thank Sir Mark enough for what he’s done for my career, and I’d like to think riding for him, since I joined him, I’ve stepped up my game, because his traits have rubbed off on me. We’ve got some really nice yearlings this year from good owner-breeders again, so you just hope that there’s going to be another good one along soon.”

In the meantime, Morris is using what little spare time he has to nurture his own breeding ambitions. He spent the December Mares’ Sale pounding the yards at Tattersalls in search of a mare with the help of Joseph Burke.

“After Alpinista won the Arc, I said I’d treat myself to a relatively nice broodmare,” he explains. “We saw some [at Tattersalls], and we underbid a few but didn’t have much luck. So Joe went off to Arqana and we got a mare called Clara Luna.”

Clara Luna (Ire), a daughter of Muhtathir (GB) and half-sister to the G2 Prix Muguet winner Don Bosco (Fr) (Barathea {Ire}), has already produced the GIII Pin Oak Valley View S. winner Colonia (Fr) (Champs Elysees {GB}). The name of another Arc winner, Enable (GB), appears under her third dam, Fleet Girl (Ire), who was an early acquisition for Prince Khalid Abdullah when he bought Ferrans Stud in 1982. And a touch of loyalty to Lanwades is exhibited by the fact that Clara Luna was bought in foal to Sea The Moon (Ger).

“I’ve been interested in bloodstock and racing since I was six years old and I’ve been wanting to get a mare, but when the time was right. So she stays at home for most of the year and then will go off to foal. It’s hugely exciting on a different spectrum, really,” says Morris.

“I hadn’t met Joe before, but he’d come highly recommended and I spent a week walking around the mares with him before I went racing every day. I couldn’t believe how much I learnt in a week walking around with him, because I might know a bit about form, but looking at mares I was a little bit lost and Joe taught me plenty in that week. I don’t really have many hobbies outside racing, so it’s my hobby, not that it’s really outside of racing, but it feels that way.”

He adds, “Once she foals to Sea The Moon, she’ll return to Study Of Man, who is obviously a son of Deep Impact, and from what Saxon Warrior has done, we very much hope that he’ll follow that path. I studied the Return of Mares, and Miss Rausing’s sent some good mares to him, so hopefully he can reward her and reward everyone that supports him.”

Morris may yet have the pleasure of riding the offspring of Study Of Man and Alpinista, with Rausing having stated that the mare would visit the young stallion during her second season after a potential first mating with Dubawi (Ire). 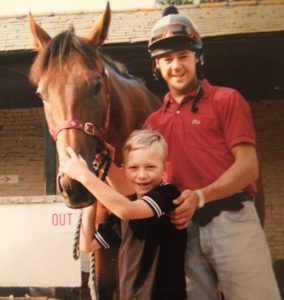 Along with a fledgling equine breeding project, Morris has his own young family to keep him busy, and his 13-month-old son Henry has already taken to the saddle in the hunting field over Christmas. The jockey’s own passion for horses was sparked when he moved to Newmarket at the age of six and walked to school alongside the town’s horse walks as members of the racing community went about their daily work. Before long, he was one of them.

“My stepdad worked for John Gosden and he used to look after Flemensfirth and ride him every day. So every day of the school holidays, I used to go and watch Flemensfirth swim, and give him a pat, and it almost felt like I was part of the team then. So that was probably where I really got hooked,” he recalls.

“I’ve always had a passion for horse racing. If wasn’t a jockey, I’d be a massive horse racing fan because I love horses, and I just feel lucky that I’ve found something to do as a career that is very much like a hobby to me.”

That old saying may go, ‘do something that you love and you’ll never work a day in your life,’ but don’t be fooled. It is hard work that got Luke Morris to where he is today, and hard work will doubtless keep him at the top of his profession for years to come. That he derives so much pleasure from that position is a much-deserved benefit.