It is more than 15 years since Henry Daly trained a grade one winner but he looks to have a horse who can take him back to success at that level after Hillcrest won the first race of 2022 at Cheltenham.

While Mighty Man won the 2006 Long Walk Hurdle at Ascot for Daly, the future for the giant Hillcrest will be over fences.

But after the Richard Patrick-ridden 3-1 shot decisively beat the highly-regarded favourite I Am Maximus by two lengths in the Listed Novices’ Hurdle, the more immediate destination this season is likely to be the Ballymore Novices’ Hurdle back at the Cheltenham Festival in March. 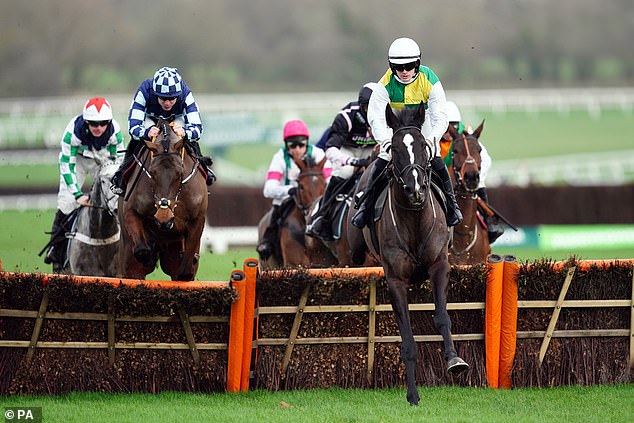 Hillcrest carries the colours of the late three-time Grand National-winning owner Trevor Hemmings, who died in October. The presence of the Hemmings name will continue with all the young horses in his team — and there are more than 20 unraced youngsters in Ireland being prepared for racing — set to run in his colours.

If there is a better one among them than Hillcrest, who has won four of his five races, it will be a bonus.

Daly said: ‘He is enormous. When he arrived in the yard, which was three years ago, he weighed 693kg and my horse’s average racing weight is 520kg.

‘He has obviously got some talent and I don’t think he has had a race today. He has had a plod around there and won as he liked.’ 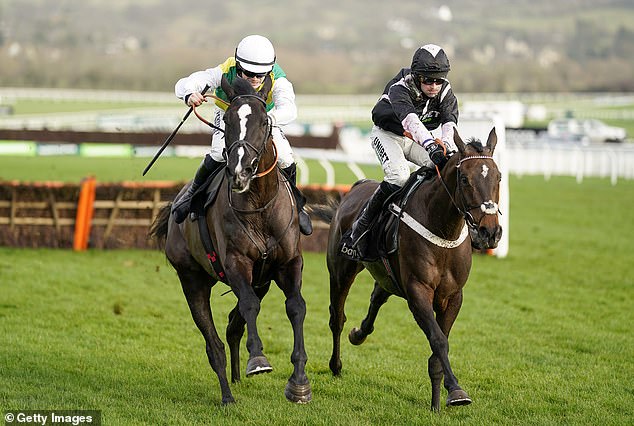 The feature Dornan Engineering Relkeel Hurdle played out in front of Cheltenham’s 29,054 New Year’s Day crowd went to Stormy Ireland, who held a narrow advantage over Brewin’upastorm when that rival fell heavily at the last.

It was a second big British festive win for trainer Willie Mullins and his jockey nephew Danny Mullins following Tornado Flyer in the King George VI Chase at Kempton on Boxing Day.

Danny came in for the ride, with his uncle’s stable jockey Paul Townend in winning action on dual Cheltenham Gold Cup winner Al Boum Photo at Tramore, where he won the New Year’s Day Chase for the fourth time.

Al Boum Photo finished third in last season’s Gold Cup but Townend is optimistic he can bounce back. He said: ‘He under performed a little bit in it last year. He’s been there and done it. I definitely think he has a live chance again.’