Favourite Langer Dan appears likely to miss Saturday’s Paddy Power Imperial Cup at Sandown to be kept fresh for a shot at the Martin Pipe Conditional Jockeys Handicap Hurdle at the Cheltenham Festival.

The six-year-old, trained by Dan Skelton, came close to pulling off the double last season, winning the Imperial Cup by four-and-a-half lengths before only being beaten by Willie Mullins-trained Galopin Des Champs — a horse now being hailed as a potential champion in waiting — in the Festival contest.

Langer Dan is 3-1 favourite for the Imperial Cup but Skelton said: ‘I have given him the option of running at Sandown but we’re thinking of keeping him fresh and going straight to Cheltenham.’ 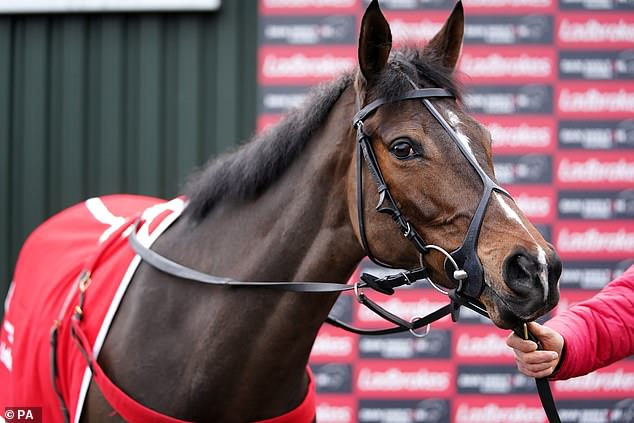 A minor injury in the autumn meant Langer Dan only made his seasonal debut last month when he was unplaced at Taunton. Last season Langer Dan narrowly missed out on a £50,000 bonus offered by sponsors Paddy Power if the Imperial Cup winner went on to win at the Festival. That is not being offered this season.

Meanwhile, a compromise has been reached in the row between the British Horseracing Authority and jockeys over the removal of a 3lb allowance which had been in place since Covid caused weighing rooms saunas to be closed.

With saunas now closed permanently — a move being hailed as good for the physical and mental well-being of jockeys — weights across the board will be raised 2lb. Riders will now be allowed 4lb instead of the current 3lb for their back protector.