Constitution Hill was promoted to 2-1 favourite for the Supreme Novices’ Hurdle at the Cheltenham Festival in March and was showered with a string of superlatives after cruising to a 12-length win in the Grade One Tolworth Hurdle at Sandown.

Constitution Hill’s performance meant he ousted stablemate Jonbon at the head of the Supreme betting — that gelding is now 5-2 second favourite. 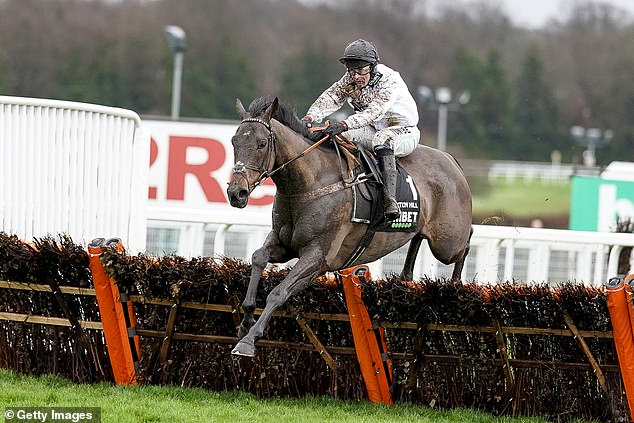 Henderson, who watched his sixth winner of the Tolworth from his Lambourn stable where he is isolating after a positive Covid test, said: ‘That’s the best medicine in the world. You couldn’t help but be impressed, it was staggering. It turned into a bit of a doddle but it was a Grade One race.

‘You would be lucky to have one like them in any year. They are both very high class — Jonbon is a seriously good horse, too.’

With both looking suited to the two miles of the Supreme Novices’ Hurdle, Henderson indicated that they were likely to take each other on rather than avoid each other in the opening race of the Festival on March 15.

De Boinville added: ‘He felt like a special horse. He answers every question and he always seems in his comfort zone. I believe there is more to come from him.

‘He’s push-button to ride, just a jockey’s dream. I was blown away by that today. All being well he and Jonbon will meet at Cheltenham and it will be a great match-up.’

While Constitution Hill, whose owner Michael Buckley had flown in from Florida to watch the race, is likely to go direct to the Festival, Jonbon’s stepping stone to it will be in the Rossington Main Novices’ Hurdle at Haydock on January 22 or Sandown’s Contenders Hurdle on February 5.