CHELTENHAM TIPS: All the best bets from day two of the Festival as Nicky Henderson targets a record seventh success in the Queen Mother Champion Chase with Shishkin and Tiger Roll seeks a fairytale farewell

Sportsmail provides all the tips ahead of the second day of Cheltenham Festival with selections from Britain’s No 1 tipster Sam Turner, eight-time champion jockey Peter Scudamore and festival winning jockey Lizzie Kelly.

Unbeaten in seven starts over fences, including when lowering the colours of the well-ridden Energumene in an enthralling Clarence House Chase in January, Shishkin boasts all the components required to win what promises to be a race for the ages.

There were areas of the selection’s Ascot performance which can be honed and improved whereas events panned out almost perfectly for Energumene who enjoyed a free rein at the head of affairs and a two-length advantage at the last. 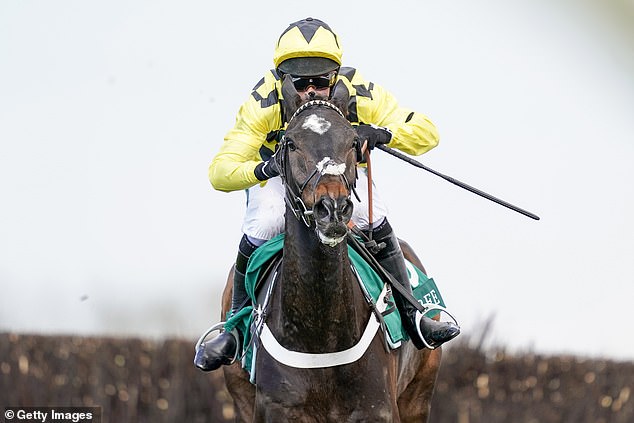 Unfortunately for the Irish raider, that is the point in the race where Shishkin’s turbo invariably kicks in and, just like a top-class 400m runner, he maintains a gallop that most rivals just can’t live with.

It could be a similar scenario for the Irish duo, last year’s winner and runner-up Nube Negra and Put The Kettle On with Nicky Henderson’s star chaser expected to power up the Cheltenham hill in front.

Sir Gerhard and THREE STRIPE LIFE (Cheltenham, 1.30) also renew rivalries following their meeting at the Dublin Racing Festival and, although six lengths separated the duo there, the margin of the former’s superiority may not be as stark today.

Many will feel it is a foregone conclusion that Sir Gerhard will confirm the placings and that may well be the case, but Three Stripe Life’s pedigree is chock-full of stamina so there could be more improvement to come now that he stretches out in trip. 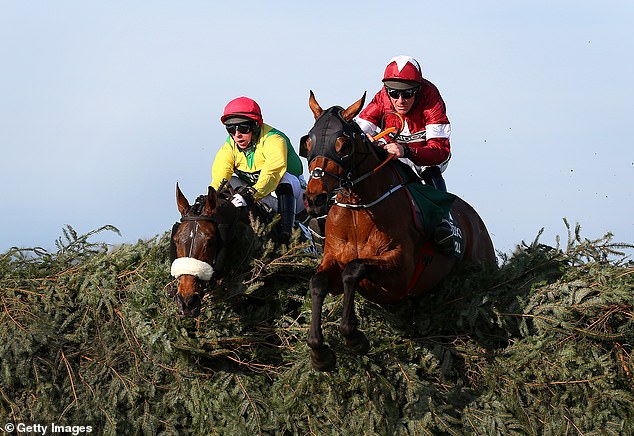 The Brown Advisory Novices’ Chase promises to be a novel event as it is one race this week which isn’t totally dominated by Irish runners.

That isn’t to say Capodanno is a hopeless cause — he is far from that, with his effort behind Bob Olinger at Punchestown in January one of the better pieces of form on offer. However, the likes of Bravemansgame, Ahoy Senor, Threeunderthrufive and L’HOMME PRESSE (Cheltenham, nb, 2.10) will all harbour hopes of lifting this for the home contingent with the latter preferred courtesy of his slick jumping and course form.

Strong stayer Threeunderthrufive is another with a track win to his name who could well outrun his odds.

DROP THE ANCHOR (Cheltenham, nap, 2.50) caught the eye in last year’s County Hurdle, finishing strongly after being outpaced, and it was a similar story over an inadequate two miles at the Dublin Racing Festival. 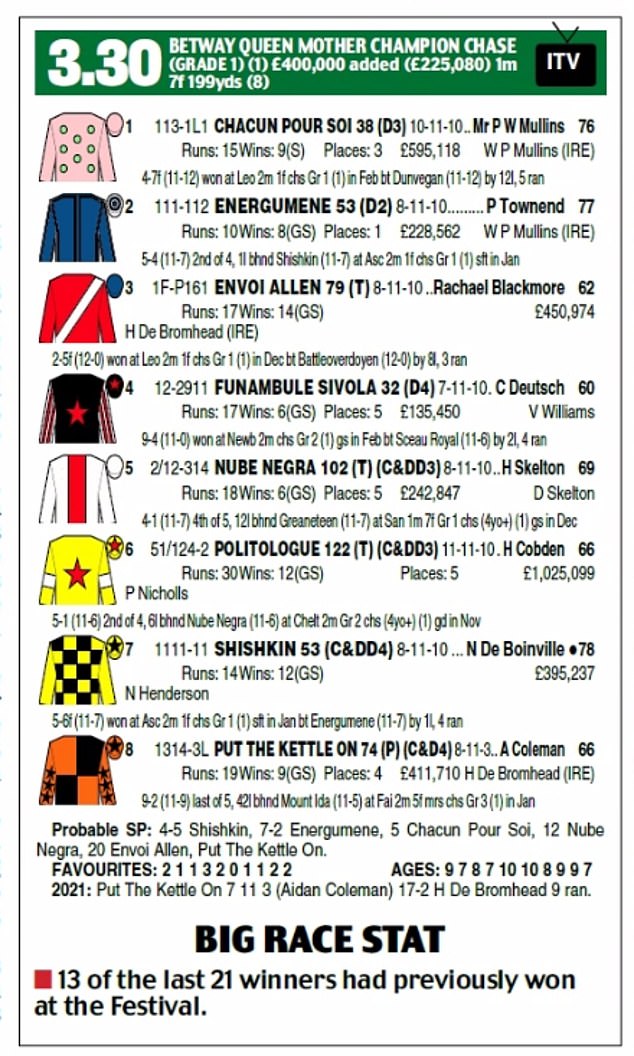 That form has already been boosted by the ninth-home Surprise Package bolting up in the Imperial Cup and he could improve on last year’s efforts.

Tiger Roll bids for a momentous four-timer in the Cross Country Chase and has been the only horse the market has wanted in recent days, but stablemate DELTA WORK (Cheltenham, 4.10) is a classy recruit to this discipline and offers more value if he takes to this new test.

SKY PIRATE (Cheltenham, 4.50), winner of this race last year, faces a stiffer task 12 months later, but his record over two miles at this venue reads 112 and he could outrun his odds despite the presence of the nicely treated Buddy Rich and Amarillo Sky.

Facile Vega has been the buzz horse for the concluding bumper for months now and his impressive Leopardstown success last month has done nothing to dampen the hype.

He is just one of seven from the Willie Mullins stable intent on winning this event, but AMERICAN MIKE (Cheltenham, 5.30) may spoil the party following striking victories at Down Royal and Navan.

His trainer Gordon Elliott has been content not to run him again since and stable confidence appears undiminished in his chance.

It is the big day at the Festival for me and my trainer partner Lucinda Russell, with AHOY SENOR running in the Brown Advisory Novices’ Chase.

He was beaten fair and square by Bravemansgame in the Kauto Star Novices’ Chase at Kempton over Christmas when it just didn’t happen for him on the day.

But that has not rocked my belief in him.

He led at Kempton but we feel strongly that he has jumped much better when he has been among horses and that is likely to be the case in a very competitive race in which you have to give all the runners maximum respect.

I am trying to take on the odds-on favourites this week but make an exception with the outstanding SHISHKIN, who has all the equipment needed to win the Queen Mother Champion Chase.

Trainer Gary Moore is having his best season and can top it off by landing a Cheltenham Festival victory with EDITEUR DU GITE in the Johnny Henderson Grand Annual Chase.

SHISHKIN will have to run below form to get beaten in the Queen Mother Champion Chase but I have been won over by the very positive vibes for very well-bred Champion Bumper hope FACILE VEGA. His dam, Quevega, was a record six-time Festival winner.

Dual Grand National winner TIGER ROLL is expected to retire after trying to win the Cross Country Chase for a fourth time and register a record-equalling sixth Festival win. He comes alive at this meeting and trainer Gordon Elliott is exuding positive vibes.

SAINT FELICIEN is a lightly raced gelding who has improved in each of his three runs.

On my ratings he looks the pick of trainer Gordon Elliott’s seven runners in this race and has a good chance of beating a field of exposed handicappers.