By Marcus Townsend For The Daily Mail

Jockey Charlie Deutsch predicted that L’Homme Presse will be a Gold Cup contender next year after he landed the Brown Advisory Novices’ Chase with a flawless round of jumping.

The 9-4 favourite gave Deutsch a first Cheltenham Festival win as he made it five unbeaten runs over fences with a three-and-a-half length win from Ahoy Senor.

It was a seventh Festival winner for trainer Venetia Williams, who has Royal Pagaille in this season’s Gold Cup on Friday, and her first at Grade One at the Festival. 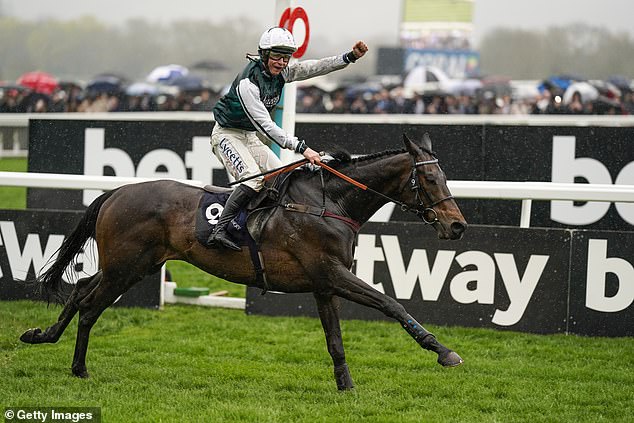 Deutsch said: ‘He’s got everything and he oozes class. It makes my job really easy and I just love him to bits. He could definitely be a Gold Cup horse off the back of that.’

L’Homme Presse was one of only two British-trained winners on day two, the other being Ben Pauling-trained Global Citizen, who won the Grand Annual Chase ridden by Kielan Woods.

After being suspended during the 2021 meeting because of a picture of him sitting on a dead horse, Gordon Elliott had his first winners of the week courtesy of Delta Work in the Cross Country Chase and Commander Of Fleet, 50-1 victor in the Coral Cup.

But the day belonged to Willie Mullins. As well as Energumene in the Champion Chase he supplied easy winners of the Ballymore Novices’ Hurdle (Sir Gerhard) and Weatherbys Champion Bumper (Facile Vega).