Cheltenham countdown: Gary Moore on a course for a Triumph double tilt, while Fergal O’Brien’s Festival small team will be led by Imperial Alcazar

Trainer Gary Moore says he will run both Grade One Finale Hurdle winner Porticello and Teddy Blue in next week’s JCB Triumph Hurdle at Cheltenham next week providing the ground suits the stablemates.

Moore said: ‘Both are entitled to be there.

‘The only way I wouldn’t run Porticello is if the ground came up good or quicker. He’s too nice to mess up. But it’s good to soft, or softer, then he’ll definitely run.’ 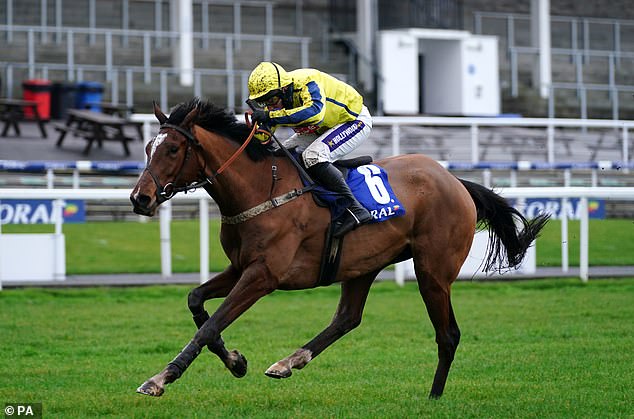 Conversely, Moore has warned Teddy Blue, who was an unlucky second on his hurdling debut in the Adonis Hurdle at Kempton when making a bad mistake at the last flight, would miss the Triumph if conditions become too testing.

On the distribution of winners next week, Hills make it Evens favourite that Britain will have seven or less wins.

FERGAL O’BRIEN’s Festival small team will be led by Imperial Alcazar, who is likely to run in the Paddy Power Plate Chase on day three of the meeting out of his four entries.

O’Brien said: ‘That seems to be where we are heading at the minute. Fingers crossed he’s in great form.’

Imperial Alzazar was an impressive 10-length winner of the Timeform Novices’ Handicap Chase at Cheltenham on Trials Day in January.

ANNEMARIE PHELPS, the first female chair of the BHA, is to step down when her term of office at the end of May.

The announcement that Phelps will not seek a second term comes after a fierce debate behind the scenes about the role of the BHA amid pressure from racecourses and the representative of the sports’ participants – owners, breeders, trainers and jockeys – to have more control over commercial decisions.