Bryony Frost will miss out on trying to win back-to-back editions of Saturday’s Grade One Celebration Chase at Sandown after discovering she had fractured a vertebra in a fall at Aintree’s Grand National meeting.

Frost has been sidelined since the heavy spill on Thyme White in the Red Rum Handicap Chase on April 7.

She initially saw a shoulder specialist who recommended a period of rest, and also had CT scans in Liverpool which showed no new bone injury. 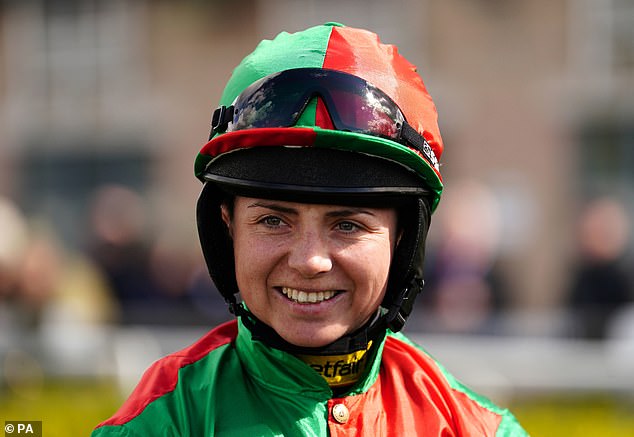 But after reporting continued discomfort in her back, a more detailed MRI was carried out.

‘This showed an area of bone bruising in a single vertebra with a stable fracture,’ said a spokesman for Britain’s top female jump jockey.

‘Bryony has reluctantly agreed not to return to riding until sufficient healing has taken place and will also use the opportunity to address her shoulder issue.’

As well as winning last year’s Celebration Chase on Greaneteen, Frost and the gelding then won the Grade One Tingle Creek Chase at Sandown in December. That victory, days before a BHA disciplinary hearing found fellow jockey Robbie Dunne had conducted a campaign of bullying and harassment against Frost, saw her rapturously cheered back to the winner’s enclosure.