COVID-19 prevented crowds at Doncaster for the Pertemps St Leger and the pandemic also played a part in the result of the final Classic of the season with late substitute jockey Tom Marquand stepping in on winner Galileo Chrome for quarantined colleague Shane Crosse.

Marquand was only called up by trainer Joseph O’Brien on Friday to partner the 4-1 winner when 18-year-old Crosse tested positive for Covid despite being asymptomatic.

In a further twist, Marquand had originally been booked to ride English King and only became available when trainer Ed Walker decided to re-direct that colt to Sunday’s Grand Prix de Paris at Longchamp. 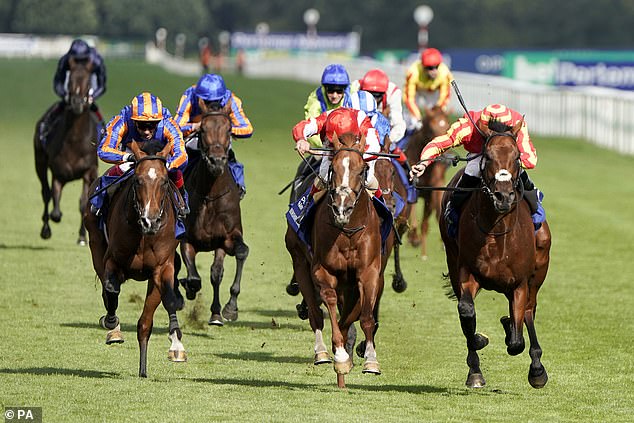 Marquand, 22, emotionally celebrated his first Classic win as Galileo Chrome edged out 16-1 shot Berkshire Rocco by a neck but admitted his thoughts were with Crosse.

Marquand said: ‘Shane’s misfortune is lucky for me. I can’t stress enough how bad I feel for him. We are both relatively young so I can relate. He’ll be in pieces no doubt.

‘It is probably the most clichéd thing that can come out of my mouth but to win is a dream come true. To have my first group one winner on UK soil in the St Leger for Joseph O’Brien, who when I was growing up was one on the best jockeys around, is mind-blowing.’

Galileo Chrome’s win was a first Classic win for O’Brien in Britain in a race he won as a jockey seven years ago on Leading Light. 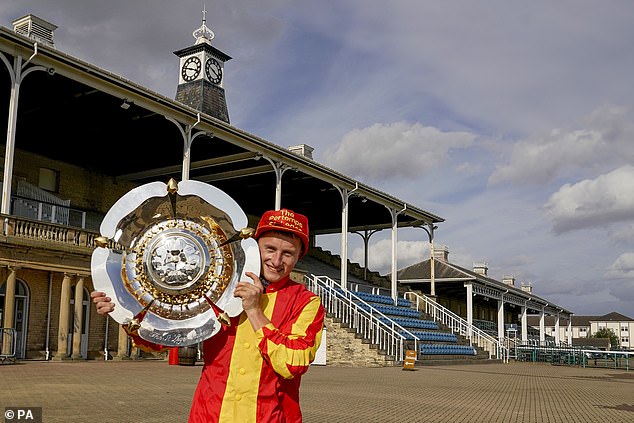 Jockey Tom Marquand claimed his first Classic win, having only secured the ride on Friday

He became the first person to ride and train a St Leger winner since Harry Wragg, who saddled Intermezzo to glory in 1969, 26 years after partnering Herringbone to success in the world’s oldest Classic.

Because he has had close contact with Crosse, Joseph was forced to watch from home. The trainer said: ‘Tom has obviously been riding extremely well for a number of years now all over the world. When he was available, we didn’t have to look any further.

‘Shane is obviously gutted to miss the ride but he is a young man and a very talented rider. He’ll have plenty of big rides in the future.’

Covid-19 has thoroughly disrupted racing in 2020 but Marquand has emerged as well as any jockey. While the sport was shut down in March, he rode his first group one winners while based in Australia as part of his burgeoning partnership with Newmarket trainer William Haggas.

He lost the Derby ride on English King to Frankie Dettori at Epsom in July but his replacement mount Khalifa Sat ended up doing better, finishing second. Marquand lies third in the Flat jockeys championship but it has been his partner Hollie Doyle who has been attracting more headlines with her ground-breaking achievements.

Marquand said: ‘We are both extremely proud of each other’s achievements. Long may the household continue on that path!’

The long, searching Doncaster straight sorts out the suspect stayers in the St Leger and it was stamina which counted for Galileo Chrome, who had won a one-mile five-furlong Listed race at Navan on his latest start.

Frankie Dettori reckoned fourth-placed 5-2 favourite Santiago would have appreciated softer ground but those who failed to last included fifth-placed Hukum and third-placed Pyledriver, who had been cruising two furlongs out.

His jockey Martin Dwyer said: ‘I thought I would win turning in but he was tired in the final furlong.’

The Seamus Heffernan-ridden mare beat odds-on favourite Ghaiyyath by three-quarters of a length to land the prize for the second year running.